It has been a bad start to 2017 for EA Games and their popular Star Wars Galaxy of Heroes. Oh, I am sure the investors are happy. And the executives are certainly not worried. The programmers and those “in the trenches” may realize this – at least I hope they do – they have screwed things up a lot of late. 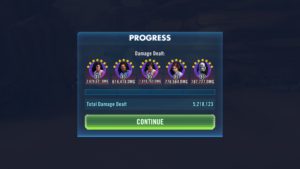 The biggest screw-up in my opinion is the “Rebalanced” Tier 6 AAT Raid which I wrote about weeks ago saying the Tier 6 AAT and Heroic AAT couldn’t be farther apart. It went from a gazillion hit points and solid Guilds needing a week or more to beat it to a few hours. Seems extreme huh? Check out the graphic – yes, that is 5 million damage on the Tier 6 AAT Raid after being rebalanced. That made up about 40% of Phase 4. Rebalanced my ass – that is downright stupid. In an effort to be more fair with my Guildmates I have even started running a different version of that team and even missed a 4th Phase so that more members have a chance to “practice” in this screwed-up gaming environment. Add to this that since the rebalance Phase 3 and the Chirpatine strategy no longer works, because my Emperor Palpatine character is too strong and kills the droids in one hit, and the rebalance shows another huge flaw.

The latest Newsletter said that the EA team “identified an issue with Barriss Offee” on her Zeta ability and how it still took effect after she was dead in a battle. So they refunded everything to the rich folks who already had her at Zeta and “fixed” the Zeta ability for Barriss. Of course those who fought Barriss Offee teams in the recent Jyn Erso tournament, in the Squad Arena and in the Galactic War get a prize too. A bowl full of nothing. Did you get 101st in second SWGOH Jyn Erso tournament? Too damn bad. Did you spend your own hard-earned money on the game because of the imbalance from Barriss teams? Did you miss out on rewards in the Squad Arena or Galactic War? Here is a kick in the balls for you. Enjoy!

So what do we make of this? It is apparent that Electronic Arts is doing great financially and has seen their stock rise from around $70 a share when Star Wars Galaxy of Heroes was released and is sitting at over 10% higher today, and when the money is coming in nothing else matters. But this pattern of nerfing the game is getting more and more common (did you see the Galactic War last night?). Whether it is pushing updates out too quickly without testing, pressure from the corporate structure or just plain bad planning, something is not right and guess who gets screwed – you and I.

SWGoH: How to Beat CLS without CLS

SWGoH: Should I save my Ally Points or spend them? – Gaming Fans

[…] that 50th Guild member who nobody has heard from in the past week. While rumors of hackers and the nerfed Barris Zeta seemingly played a role in their demise, at least in the short term, the accumulation of Ally […]

[…] Today’s toon to review mods for will be the Barriss Offee, a the number one healer in SWGoH and a topic of recent controversy regarding Zeta materials. […]

[…] Star Wars Galaxy of Heroes has nixed the tournaments after reported cheating and the nerfed Barriss Offee Zeta which rewarded only those who had Barriss, not those who lost out because of these things (yes, I […]

[…] Today’s toon to review mods for is Rogue One Rebel Jyn Erso. First available in tournament play, Erso was made available in a second round of tournaments on SWGoH as the peak of the rumored cheating shut down the entire tournament system at the same time of the nerfed Barriss Offee zeta. […]