Fans like to discuss all kinds of different topics on the message boards and Reddit in regards to the popular game Star Wars Galaxy of Heroes, and while some of the items below have been topics of conversation in the past, I thought I would highlight a few of the biggest quirks in the game. 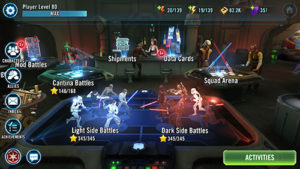 Savage Opress is considered a Sith. Okay, so let’s go over this rule of two thing. Palpatine/Darth Sidious and Dooku/Darth Tyranus are the reigning Sith when Savage Opress leaves Dathomir to join Dooku as his apprentice during the Clone Wars. But who did Opress replace? Asajj Ventress. So he is a Sith and she is not? Always two, there are (not).

Asajj Ventress is not considered a Sith. See the Savage Opress write-up above. #SMH

Boba Fett & HK-47 can come back to life after being defeated, but Darth Maul cannot. After being cut in half by Obi-Wan Kenobi in Episode I, Darth Maul was presumed dead. Then, during the Clone Wars, George Lucas somehow decided that he was not. While the Darth Maul character has gotten cooler and cooler as we saw more of him in the Clone Wars and now in Star Wars Rebels, it makes no sense that he does not have some kind of revive ability. And why not a unique called “blind” – he did blind Kanan Jarrus in Rebels. A new debuff perhaps?

TIE Fighter Pilot is one of the strongest toons in the game, Luke Skywalker is one of the weakest. When I started playing SWGoH I was excited, like most, to get Luke Skywalker. Given the farm was a bit tough (at the beginning), he was not one I focused on too strongly. While his Bullseye attack can hit pretty hard, honestly this toon is near the bottom of the game in terms of value in my opinion. Then the TIE Fighter Pilot was added to coincide with the addition of the Ships to the game. Somehow this guy, who was a dime a dozen in the movies and, in all honesty, rather bad at his job, is a near offensive juggernaut.

Non-Canon characters continue to be added, canon characters do not. As of tonight, Darth Nihilus will be added sometime in February. Meanwhile HK-47 is a huge part of the current game as a major piece to Phase 2 of the Heroic AAT, As of today we still do not have anyone from the Rebels series, no Jango Fett, Padme Amidala and several others from our Top 10 toons missing from SWGoH.

Regarding Savage and Ventress;
Sith is a religion, defined by a set of philosophies and traditions. When Dooku dropped Ventress as his apprentice, she abandoned his teachings – making her a dark side force user, but not a Sith. Savage on the other hand, found a new master, and continued to learn and follow the ways of the Sith.

[…] the reworking of other Sith toons Darth Vader, Darth Sidious, Darth Maul and Savage Opress (why is Savage Opress a Sith and not Asajj Ventress?) and a few other changes. The introduction of Jyn Erso, Cassian Andor and Chirrut Imwe to Chromium […]

Hk-47 is a character you meet in the kotor when playing. I think playing as a bounty hunter. Not to mention like in the form he’s in would be nothing in a real fight a small farm kid with no training in the force yet? Yea no not in my army….

After the Dooku betrayal Ventress renounced to be a sith , I don’t know which episode of Clone Wars but she was transformed with a ritual to a nightsister again.