Welcome to the Poe Dameron mods guide, the latest Star Wars Galaxy of Heroes article where we take a look at the best mods for individual characters. While I do not claim to have all of the answers in this game, I do my research and have used every toon I write about extensively. These are mod recommendations and they are certainly not the only option. However we look to help players maximize their characters in SWGoH and we are always open to hearing your feedback @GamingFansDFN on Twitter if you have a mod setup that works well in your own gameplay. 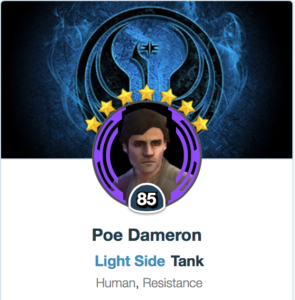 Today’s character to review mods for will be Poe Dameron, the “best pilot in the Resistance” who opens Episode VII and proves to be one of the heroes of the new trilogy. Available in the Cantina Battle Store, my original thoughts in 2017 were that “Poe is a pretty easy farm for anyone in need of a Tank with good speed and interesting abilities.” Of course the game evolved and the Zeta Finn lead in an all-Resistance squad became quite valuable using Poe Dameron in SWGoH, but when Rey (Jedi Training) was released his value dipped again. Now with the new 2020 version of Rey coming out as a Galactic Legend character and Poe needed to compete to unlock her, Poe Dameron is once again a character of value. Let’s take a look at the best stats to enhance for Poe through mods in SWGoH.

Main Focus: While every character needs Speed (yes, I do say this every time because it is true), Poe Dameron needed it more than almost all others when the old Zeta Finn Resistance strategy was in place. While Poe is one of the lucky characters with a strong Speed stat as designed, that just means he is a great candidate for a set of four Speed mods.

Additional Areas to Focus: Potency, Tenacity and survivability. With Speed as the number one focus, that leaves Potency a close second.  Poe’s basic attack, Challenging Shot, has a 40% chance to inflict offense down and his special ability, Resistance Bravado, has a 65% chance to Expose enemies and inflict buff immunity for 2 turns. That Expose debuff is still very important to effective use of Poe given the value of the Expose debuff under a RJT lead, so boost your Potency to maximize the benefits his Resistance teammates will receive.

Tenacity, while not as important on other characters, is a solid area to focus with Poe because his unique ability, Stand Firm, allows Poe (and Finn, if present) to recover 7.5% of his Max Health whenever he resists a negative status effect, but compared to the need for Speed and Potency, this is far less important. Finally, Poe is designed to be a tank and eat up shots from the enemies, so added survivability (health, protection & defense) is important, but do not sacrifice too much Speed and Potency.

In-game Mod Recommendations: Speed & Potency. No disagreement here – I am just glad the developers took the time to actually make sure their in-game recommendations were good ones. Many original SWGoH characters were glossed-over when these were added to the game, but this is one they got right in my educated opinion.

The “ideal mod setup” can be interpreted a few different ways. If you target Speed, Potency, Tenacity and Health through the mods this could work out well a number of different ways. Here is my recommended mod setup to maximize the abilities of Poe Dameron in SWGoH:

[…] in the Top 20 nor have we for some time. If you were to run a Zeta Finn squad, having the right mods on Poe Dameron, Resistance Pilot and Resistance Trooper would be incredibly important in my […]

I disagree a lot in this set up. Poe needs to be focus in potency and speed, nothing else. Speed only so it can start first exposing, and potency so it can expose as much as he can. That’s it. ?

Thanks for the feedback – your comments forced me to review what I had written and I found it to be outdated. The article has been updated, I am expecting you will agree now. If not lmk. Thanks! (any interest in writing a few mod guides yourself?)