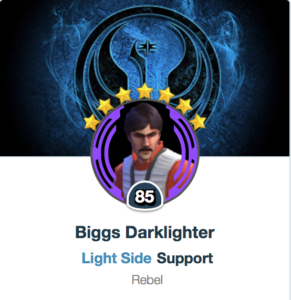 Today’s character to review mods for is Rebel pilot Biggs Darklighter. Used correctly (paired with Wedge), Biggs once proved to be one of the most valuable members of your AAT or Heroic AAT team for Phase 2 or Phase 4. But the game has changed dramatically over the years, and 2018-2020 has been Wiggs as mostly irrelevant until being announced as a required character to unlock Jedi Master Luke Skywalker in late 2020. Let’s take a look at which mods are best used on Biggs Darklighter to enhance his abilities.

Main Focus: Speed. In the past I said Critical Chance and Critical Damage were more important than Speed for Biggs, but Speed needs to be 1a to CC/CD as 1b. Making Biggs as fast as possible, and I am talking 230-250+ speed fast, will maximize damage in any game mode. Given he has just a 128 base Speed, using a set of Speed mods is not advised, but CC/CD mods with high Speed secondaries is what I use on my personal account. Pair him with Wedge Antilles for the assist on the Comrade-in-Arms attack and you will often a defense down from Wedge if his Potency levels are in line.

Additional Areas to Focus: The other main focuses for Biggs Darklighter are Critical Chance, Critical Damage and Offense. Biggs has just over 51% Critical Chance at Gear 13 and that increases to 63.83% at Relic 3, the level required to unlock Jedi Master Luke Skywalker, so a CC set or strong secondary stats will boost that nicely. Any additional Offense boost are a plus since we know that offense directly impacts CC and CD stats as well. Finally, added survivability is good to ensure Biggs does not die too quickly.

In-game Mod Recommendations: Critical Chance & Critical Damage. I stand by the need for Speed first with Biggs given more Speed on him will directly impact Wedge as well when they are used together (and why would you not use them together?). That having been said, focus on the Speed from your secondary stats on the CD set of 4 and the CC set of 2.

Biggs Darklighter is one of those toons that everyone used to run (with Wedge of course) in the Arena back in 2016, but in order to maximize his effectiveness, getting the right sets of mods is important. I prefer the mix of four Critical Damage and 2 Critical Chance mods to ensure you maximize Biggs Darklighter’s ability to hit hard and bring in his buddy Wedge to assist. Note that because Biggs has a highly-used ship in the Fleets Battles & Arena, you want to ensure he has 5-dot mods or higher to maximize the ship’s stats as well.

Please do Wedge soon so we can complete “Wiggs”…looking forward to your ideal setup suggestions. Thanks for all you do for the community!

[…] (like many) Critical Chance and Critical Damage. Because I suggest focusing more on speed with Biggs Darklighter, for those who lack mods with high speed secondaries, I would ensure Wedge is fast, but put my best […]

WTF??? U said SPEED is number 1 with CC/CD 2nd. Then u list all CC/CD mods to put in. I assume u then meant all CC/CD mods with secondary stat focus on speed…but speed is almost nowhere on these mods u suggest. Please explain…maybe I’m just slow…

“I assume u then meant all CC/CD mods with secondary stat focus on speed” – exactly. That is where the most effective use of Speed in this game comes from.