Welcome to the Baze Malbus mods guide, the latest article in our series about the popular game Star Wars Galaxy of Heroes where we take a look at the best mods for individual SWGoH characters. While I do not claim to have all of the answers in this game, I do my research and have used every toon I write about extensively. These are mod recommendations and they are certainly not the only option. However we look to help players maximize their characters in SWGoH and we are always open to feedback if you have a mod setup that works well in your own gameplay. 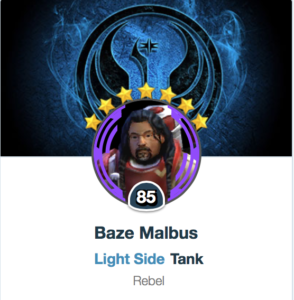 Today’s character to review mods for is Rogue One Rebel and Guardian of the Whills Baze Malbus. Used correctly, Baze proved to be a very valuable member of your team in many areas of the game, even at 3 or 4 stars when first released, including in the Heroic AAT when it was seen as the game’s biggest challenge. While the game has evolved and changed dramatically since Baze and Chirrut were the Arena META, the new Rebel Fighter faction tag has added value to Chase once again.

Main Focus: While every character benefits from Speed, Baze is one of the few who do not need a lot of Speed to make him effective. Since he begins each battle with a Taunt and Retribution he will get plenty of hits in without a need for a fast Turn Meter, so stay focused on long-term survivability with Baze by beefing up his defense, health and protection. Because of the Retribution, you want him to take every hit possible so high Defense will go far toward keeping him alive, but be sure to focus on Health as well. Baze’s unique, Dauntless Courage, grants him Max Health equal to 20% of his Max Health and if Chirrut Imwe is present he also gains that much Max Health. Thus, more Health for Baze equals more Heath for Chirrut. Also worth noting is that the SWGoH Relic upgrades for Baze Malbus significantly improve his Health and Armor while also improving his Resistance, Protection and Health Steal.

Additional Areas to Focus: Since Baze’s main focus is staying alive as long as possible, the secondary areas of focus should be Potency and Tenacity. Potency helps his offense as his basic attack, Heavy Repeater Cannon, has a 70% chance to inflict Speed Down on the target. Plus if Chirrut is present Baze gains 10% Turn Meter whenever he uses his basic. Tenacity can also benefit Baze as high Tenacity will make it harder to land Stun, Shock, Buff Immunity and other debuffs.

In-game Mod Recommendations: Health. Given the value of Health to his kit and his pairing with Chirrut Imwe, this seems the best route to go.

Baze Malbus is a character that lost a lot of value as the game’s power creep continued to roll from 2017 to 2020. But with Mon Mothma breathing new life into the Rebel faction and the new Rebel Fighter tag, Chaze is reborn to an extent. I recommend you work on getting both Chirrut and Baze to work together and maximize their effectiveness going after Health mods, and possibly Defense, for Baze. Here is my preferred mod setup for Baze Malbus:

[…] damage than physical damage, or much higher armor than resistance. A prime example of this is Baze Malbus. At max gear level, before mods, Baze has a massive 32.71% armor stat, and a much lower 15.95% […]

Why would you not choose crit avoidance for your arrow prim.?

I guess it is a matter of perspective and preference. I see the Chaze combo as valuing Health given the Heal Over Time buffs. Thus, higher health makes him harder to kill since he regains health over and over again.