Welcome to our Best Mods for Chirrut Imwe article – the latest in our series about the popular game Star Wars Galaxy of Heroes where we take a look at the best mods for each SWGoH character. While I do not claim to have all of the answers in this game, I do my research and have used every toon I write about extensively. These are mod recommendations and they are certainly not the only option. However we look to help players maximize their characters in SWGoH and we are always open to feedback if you have a mod setup that works well in your own gameplay. 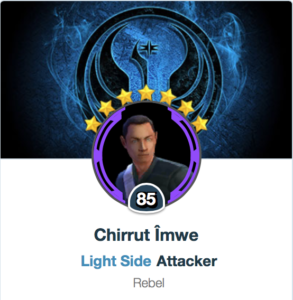 Today’s character to review mods for is Rogue One Rebel and Guardian of the Whills Chirrut Imwe. Used correctly, Chirrut was once upon a time a member of the Squad Arena META and quite valuable when the Heroic AAT was a challenging piece of endgame material.

Main Focus: Chirrut, like every character in Star Wars Galaxy of Heroes, benefits greatly from Speed and this should be the top focus for him. His base speed of 173 at Gear 13 places him in the Top 20% of fastest characters in the game, thus using mods to boost that speed to the 250+ range is suggested.

Additional Areas to Focus: Health, Tenacity and Offense or Critical Chance/Critical Damage. Since Heal Over Times (HOTs) are quite prevalent with Chirrut, it makes sense to maximize his Health. Baze Malbus‘s unique grants him Max Health equal to 20% of his Max Health and if Chirrut Imwe is present he also gains that much Max Health. Given the fact that pairing Baze with Chirrut is how the characters were designed, remember that more Health for Baze equals more Heath for Chirrut. While Chirrut does dispel all debuffs with his special As The Force Wills, opposing teams may try to land ability block, so high Tenacity for Chirrut makes sense. Because he is an Attacker and the Rogue One team in general tends to lack offensive firepower, adding Offense, Critical Chance and Critical Damage can help enhance Chirrut’s damage output. Since his Chirrut Imwe’s Relic upgrades greatly enhance his Damage, CC and CD, it is clear that the developers have intended him to be used in his Attacker role.

In-game Mod Recommendations: Offense & Tenacity. While I do not completely disagree, I feel that Health and Speed should be the two main areas of focus for Chirrut ahead of Offense and Tenacity, however I look to gain high Speed from secondary stats and not a set of Speed mods. In addition, with Relics now in play this Mods 2.0 recommendation feels outdated. Looking at his Relic stat increases, a maxed out Relic 7 Chirrut has a base CC of over 84% and CD of 163.5%. Thus, a set of 4 Critical Damage mods alongside a set of either Health or Tenacity mods makes a lot of sense in the 2020 version of Galaxy of Heroes.

Chirrut Imwe is a character that lost a lot of value as the game’s power creep continued to roll from 2017 to 2020. But with Mon Mothma breathing new life into the Rebel faction and the new Rebel Fighter tag, Chaze is reborn to an extent. I recommend you work on getting both Chirrut and Baze to work together and maximize their effectiveness going after Health, Tenacity and Critical Damage mods, all with high Speed secondaries for Chirrut specifically. Here is my preferred mod setup for Chirrut Imwe:

[…] Baze’s unique, Dauntless Courage, grants him Max Health equal to 20% of his Max Health and if Chirrut Imwe is present he also gains that much Max Health. Thus, more health for Baze equals more Heath for […]

Good stuff, I’m starting with Chaze on arena and gonna use this guide for my mod setup!

In an article I read “Understanding Potency and Tenacity” May 19, 2017 it says tenacity is almost useless. Why then do you use it on Chirrut Imwe and not something like more health or defense?

Hi! Looking over the article you mentioned, there appears to be a missing paragraph which points out there in some situations, even a small increase to tenacity could be worth it for specific characters. Chirrut in arena is one of those – being able to remove certain debuffs, like ability block, for example, from your entire team (not to mention the healing) makes a secondary focus on tenacity more worthwhile, especially if you’re able to get a few decent secondaries.

It should be noted however, that when we talk about secondary focus on mods, they’re nice to have, but not as important or essential. They’re also the stats that are the most flexible, and most debated.