Welcome to the Ahsoka Tano mods article, the latest article in our series about the popular game Star Wars Galaxy of Heroes where we take a look at the best mods for SWGoH toons. While I do not claim to have all of the answers in this game, I do my research and have used every toon I write about extensively. These are mod recommendations based on the character’s kit and actual gameplay to help you in your quest to dominate the Galaxy of Heroes holotables. 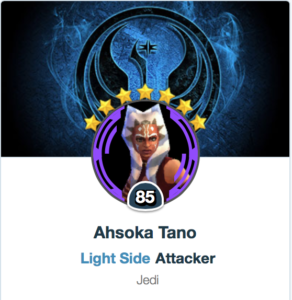 Today’s character to review mods for is a fan-favorite of the Clone Wars – Ahsoka Tano. Originally just in the Clone Wars, Tano left the Jedi order only to appear later as the Rebel informant Fulcrum in the Star Wars Rebels series (and added in SWGoH as “Fulcrum” Ahsoka Tano). While much of what she did in her time between the two cartoon series is unknown, the book Ahsoka was released during the summer of 2016 and explains some of her time away (see: Star Wars Books), and it is a recommended read.

For the purpose of Star Wars Galaxy of Heroes, Ahsoka Tano is a Jedi who has a nice synergy with Jedi Knight Anakin and General Kenobi after the April 2019 rework, works well under a Padme Amidala lead and has an enhanced synergy with the 501st Legion of Clone Troopers. Let’s take a look at the best mods to maximize her kit.

However, despite all of this, Ahsoka is so slow (125 base Speed at Gear 13) that the Speed boost only gets her to the 150-175 range situationally. As a result, Speed mods are not recommended, but Speed should still be a major focus through the secondary stats.

Additional Areas to Focus: Because we are focusing first on Speed from the secondary mod stats, we need to ensure Ahsoka hits harder and get her Health number up. Health is an obvious focus because of the Protective Maneuver attack which will see her and her allies recover 20% Health when used, and because she has +40% Max Health to start each battle. In addition, the Protection Up mechanic in Galaxy of Heroes is based off of Max Health, so 1-2 sets of Health mods with high Health secondaries is recommended. If you’re looking to beat the Geonosis Territory Battles Phase 1 Special Mission, you’re going to want a very well-modded Ahsoka alongside some very fast, high-Health teammates. In terms of hitting harder, first start with Critical Chance (before Gear 13) and then look to either a full set of four Offense or Critical Damage mods. CC is important to make her basic slightly more effective as it now dispels debuffs on Ahsoka and another random Galactic Republic ally on a critical hit. However note that once you have Ahsoka to Gear 13 and start dealing with Relic amplifiers, her base CC stat can increase to as much as 90.17%. Thus, once you start to upgrade Ahsoka Tano’s Relic, moving off of Critical Chance mods to Health mods is something to consider, unless you are facing enemies with high Crit Avoidance. Finally, Offense is going to be a good focus, but in the secondary stats look to balance Offense, CC and Health for her kit to be maximized effectively.

Speed Priority: 6/10 – Ahsoka Tano is not a character that need a ton of Speed to be effective, so your top Speed secondaries are best used elsewhere. However, she is naturally slow so be sure to get some solid secondary Speed enhancements on her.

In-game Mod Recommendations: Offense & Critical Chance. Either the team at Capital Games did not look at the changes to Ahsoka’s kit and update this (now twice since she was updated in April and August 2019), or they do not understand the character she is now (this remains true in January 2021). Offense is a great secondary stat to focus on, but the triple importance of Health to her kit now makes that a blatantly obvious stat to focus on. Critical Chance is a solid choice for the other mod set in my opinion, but only at Gear 12 and below (see above).

Since using Ahsoka Tano on my HAAT Phase 1 team in the early days of the Tank Takedown Raid, I have preferred a blend of Critical Chance and Health mods for Ahsoka, all with high Speed and Offense secondaries. However once you get her to Gear 13 consider an Offense or Critical Damage set with a Health set. Here is my preferred (Gear 12 and below) mod setup for Ahsoka Tano:

Is this the same set-up advice for Ashoka (Fulcrum)?

No it is not. We do not have Fulcrum Ahsoka up yet but will in time.

Omg everything is speed and critical damage

Pretty much. The game dictates it as currently setup.

am i missing something, or does a critical avoidance make more sense than a speed, especially if running her withOUT JKA?
you can always pick up the speed on secondarys

If you want Ahsoka, or any character taking turns and hitting the enemies, speed is necessary. There are a few exceptions as Clone Sergeant and Resistance Trooper gain TM from allied attacks, but speed is a necessary piece to almost any character in SWGoH, especially all non-tanks.