In a surprise move, Gaming-fans.com has learned that the latest character added to Star Wars Galaxy of Heroes universe will be none other than Jar Jar Binks. One of the stars of Episode I and the Clone Wars, Jar Jar is widely regarded as the worst character ever created in a Star Wars movie despite his comedic purpose. Interestingly enough, Jar Jar’s place in the canon timeline of Star Wars is incredibly important for the chain of events as they unfold. 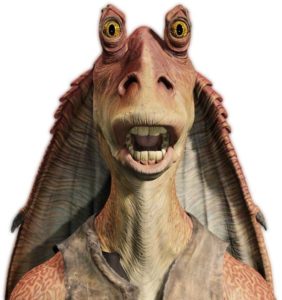 For the purpose of SWGoH, Jar Jar Binks has a kit that resembles his time in the movies – erratic and always drawing unneeded attention to himself. He is classified as a member of the Republic and as a Gungan making him the first Rebublic toon and the Gungan classification becoming a new addition to the list. This will obviously lead to speculation about both classifications on the forums. In addition, Jar Jar will be instantly farmable on Dark Side Hard node 9-B and in the Shard Shop, replacing K-2SO. Interestingly enough, the newly-added fine print in the Shard Shop is expected to read “All Jar Jar Binks shard purchases have a 20% chance to provide 0 shards of Jar Jar.”

Looking at his basic, Bombad, classic Jar Jar Binks is on display. He inflicts ability block on a character and deals significant damage to them, with a chance to damage a secondary target.

His first special, Ex Squeezee Me, is a Jar Jar’s classic sticking his tongue out with his thumbs in his ears while waving his hands and adds a taunt buff to the weakest character in the encounter, then calls an assist by a member of the opposing squad.

His second special, Mesa Helping!, grants all allies a random buff or debuff, which cannot be resisted. 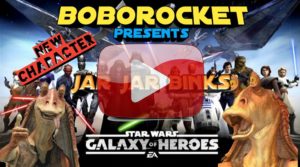 His first unique, How Wude, grants Jar Jar +25% evasion and -25% tenacity. In addition, if Jar Jar picks up any debuffs during the encounter, he has a 10% chance to deal massive damage to a random enemy at the start of his turn.

Finally, his second unique, Mesa… Clumsy, allows Jar Jar to target allies as well as enemies, ignore taunt, and causes him to target a random character each turn. On top of this, any character damaged by Jar Jar gains a new debuff, Irritated, which acts as a mini-taunt and forces that character to target Jar Jar on their next turn. If you zeta this ability, Jar Jar will also grant a Morale Boost buff to all allies when he dies if he damaged any of them, giving them +25% speed and +50% damage for three turns.

On death, the team Jar Jar did the most damage to gains ‘Morale Boost’, granting them +25% speed and +50% damage for three turns.

Overall, it looks like Jar Jar Binks could make the difference between a win and a loss depending entirely on RNG. Adding him to your squad would be a huge risk, but if the gamble pays off, in my opinion, it will be well worth it. The addition of Jar Jar is expected to take place in Saturday night’s game restart which will be pushed to all devices around 7-8 pm ET on April 1st, 2017.

As much as a April fools joke jar jar would be cool…make one move where he accidently juggles a blue bomb and drops it on enemy. Second move could have him tinkered in Droid arm and blaster accidently hits enemy… 3 could be a buff of one sort…

Revan, malak and bastilla from KoToR! If theyve got darth nihillhus they can include them surely