Welcome to another article in our series about Star Wars Galaxy of Heroes where we take a look at the best mods for SWGoH characters. While I do not claim to have all of the answers in this game, I do my research and have used every toon I write about extensively. Note that these are mod recommendations based on gameplay and the character’s in-game kit, but we recognize that some players may find other mod combinations effective as well, so we welcome any comments on Twitter @GamingFansDFN. 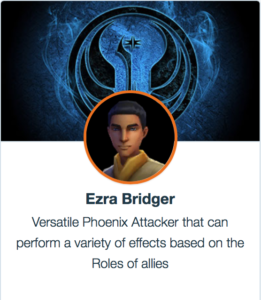 The Jedi padawan from the Rebels cartoon series, Ezra is training under Kanan Jarrus and is drawn in by Maul at times during the cartoon series. Shortly after he was released in SWGoH, on March 30th, 2017 I wrote, “when you factor in the stacking offense, Ezra Bridger’s best mods option may be offense mods given how few toons typically focus on this mod set in SWGoH.” Over time this became more and more true as the game has evolved. Let’s see what a more in-depth review of the mods for Ezra Bridger shows us.

Main Focus: Ezra is a pretty strong offensive character with stacking Offense from his unique, Push Through. Thus, building on this offense seems to be a smart move, but Speed is the key to almost every attacker in this game, so do not sacrifice large amounts of Speed in the process.

Additional Areas to Focus: Speed, Tenacity, Defense, Protection, Critical Chance and Critical Damage. If Offense is your main focus for Ezra then you should make Speed your second area of focus to ensure he hits as often as possible. Tenacity helps his basic, Rushing Strike, become more effective given that his chance to strike a second time is doubled when he is not suffering any debuffs. Defense enhances his Flourish special attack given he gains Defense Up for 2 turns. Zeb’s unique specifically deals with protection recovery each turn, which is again passed to all Phoenix allies under a Hera Syndulla lead, thus higher protection will benefit you more efficiently than other areas. And finally, since we are already looking to build on Ezra’s offensive stats, what better way that to put a focus on CC and CD to gain bigger hits?

Note that once you get him to Gear 13 it is time to start looking at how you mod him again, as a maxed out, Relic 7 Ezra will have 79.25% Physical Critical Chance, as we discuss in the Ezra Bridger relic review here on Gaming-fans.com. For the 2-mod set I would replace the CC set with a Health or Tenacity set, whichever you can find better secondaries from, to ensure your CC does not greatly exceed 100% in specific lineups where additional CC is granted to allies (Phoenix with Sabine Wren, etc.).

Shortly after his release I chose to go with a set of 4 Offense mods and 2 CC mods to gain as much offensive firepower as possible. That recommendation remained true through Mods 2.0, but with Relic in the game we have to evolve our way of looking at each character. Thus, here is my (new) preferred mod setup for Ezra:

[…] classification in the game, and that leader ability is one of the game’s best. When used with Ezra Bridger, Sabine Wren, Garazeb Orrelios and her man, Kanan Jarrus, you will find that the Phoenix Squadron […]