Welcome to the Resistance Trooper mods guide, the latest article in our series about the popular game Star Wars Galaxy of Heroes where we take a look at the best mods for individual SWGoH characters. While I do not claim to have all of the answers in this game, I do my research and have used every toon I write about extensively. These are mod recommendations and they are certainly not the only option. However we look to help players maximize their characters in SWGoH and we are always open to feedback if you have a mod setup that works well for your gameplay. 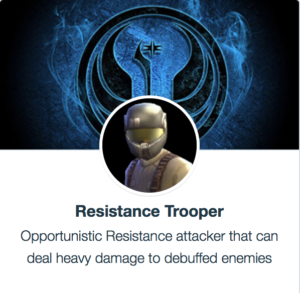 Main Focus: Critical Chance & Critical Damage with an RJT lead. The reality of SWGoH is that Speed Kills, but it is clear that the developers have tried to lessen the impact of Speed. Under Rey (Jedi Training)’s lead Resistance Trooper is not nearly as reliant on Speed and instead I recommend a strong focus CC & CD, especially for those still using him in Phase 1 of the Sith Triumvirate Raid. RT works well with his Resistance teammates, the key being big hits and the Turn Meter gained from his unique which negates the need for Speed. Thus, get your CC and CD mods on RT with the highest CC and Offense possible from the secondary stats to ensure he lands a lot of Expose debuffs on enemies and in turn gains more TM to hit again.

Additional Areas to Focus: Potency, Offense & survivability. Potency is important to help the RJT-led team gain Turn Meter from his basic and special attacks, but the mechanics of the RJT leadership with BB-8 focus more on needing CC to land the Expose. No matter what, Potency is still needed under the RJT lead to help his basic and land the Speed Down debuff is an important one from his Opportune Strike special. Also look to add survivability – defense, health and protection – to keep your Resistance Trooper in the battle longer. I would focus on Health above Protection even the value of high Health and the Gear 12 pieces in the Sith Raid against Darth Nihilus. Finally, Offense will, along with CD above, help you hit harder which is always wise with a character designed to be an attacker.

In-game Mod Recommendations: Offense & Potency. This is close, but I simply cannot agree with just saying Offense & Potency mods given how important Critical Chance is to Resistance Trooper. I would suggest using a set of CC and CD mods until you reach Gear 13 for Resistance Trooper, then consider a switch away from the CC mods as you increase Resistance Trooper’s Relic levels in SWGoH. Maxed out at Relic 7, RT has over 89% CC, so there is little need for much more Crit Chance when you get him ready for the Galactic Legend event to unlock the 2020 version of Rey.

The Resistance Trooper is one of the more straight-forward characters in terms of mods needed to maximize effectiveness with RJT as his leader. Here is my recommended mod setup, keeping in mind the CC mods up to Gear 13 and the Health or Potency mods once Relics come into play.

[…] If you were to run a Zeta Finn squad, having the right mods on Poe Dameron, Resistance Pilot and Resistance Trooper would be incredibly important in my […]

I’d have to disagree with you about speed on this one. Especially under zfinn, RT gets so much bonus turn meter he could be at zero speed and still attack three times before an opponent gets a shot off

Thanks for the feedback Mike. While I can see where a 240 speed is not necessary, I still advocate higher speeds for those times that the exposes do not land and the codlins do not get refreshed. Res Trooper is so incredibly valuable then b/c of the Expose from his basic, so while I would not sacrifice 3-5% Potency for 10-15 more Speed, I still see it as highly valuable to keep the snowball rolling downhill.

I updated the article to reflect the feedback – thanks again!