Although appealing to newer players, Savage Opress was never viable for late game play until he was reworked and received a zeta during the Sith Faction pass. It quickly became apparent that zSavage was a great character, one of the stars of the faction pass. 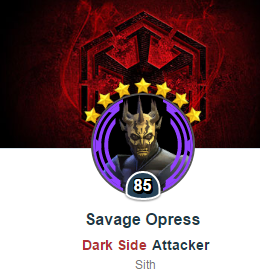 The Savage Opress Zeta ability was, as stated, added as part of the Sith Faction pass in February 2017. The in game description of Savage’s zeta’d unique, Brute, reads; “Whenever Savage takes damage, he gains Offense Up, Defense Up, and Heal Over Time for 2 turns and gains 30% Turn Meter. At the end of his turns, Savage Dispels all debuffs on a random other Sith ally and gains those debuffs for 1 turn. Dispel all debuffs from Savage whenever he is Critically Hit.”

The zeta adds the Heal Over Time when taking damage, increases the buff duration, increases the chance to gain Turn Meter from 50% to 100%, and adds the cleanse effect. While all the effects are desirable, the Heal Over Time and cleanse effects are what really makes a difference. With a few health mods, Savage Opress becomes nigh unstoppable, and can survive alone against multiple foes.

Because Healing Immunity, Buff Immunity, and other debuff based counters will be quickly cleansed, the only counters for Savage Opress is to do enough damage each hit to counteract the healing, kill him before he gets a turn and heals (Darth Nihilus‘ Annihilate is great for this), or to constantly dispel his Heal Over Time buffs.

Gameplay: I’ll be honest here – for all the things added by this zeta, Savage Opress doesn’t play any differently. The difference you see is purely how long he lives, and how many debuffs disappear from Sith team mates. Stuns, dazes, ability blocks, etc, stop mattering – Savage is going to take them, and if he takes a critical hit, he’s going to cleanse himself. And after he cleanses himself, he’s going to gain TM and a heal over time buff, and is ready for revenge.

Squad Arena: Savage Opress makes a massive difference on a Sith team. As stated before, a few health mods can make Savage extremely hard to kill. – it’s not unusual to have him be your last man standing in a tough match, and he can hold his own against multiple enemies. In addition, he helps keep other Sith characters on his team alive by taking their debuffs, plus his ability to do massive damage gives Savage the ability to single handedly change the outcome of a match.

Rancor: Because Savage Opress’ zeta is based around survivability, it doesn’t make a noticeable difference when fighting the Rancor – the biggest threat is Devour, and no amount of health, protection, or healing can stop it from killing you. However, being Sith, he makes a solid addition to a zVader team, with his massive damage special attack being a great way to quickly kill the small guys in phase one.

AAT/HAAT: I find Savage Opress works well in phase one of the Tank Takedown raid, as part of a zMaul Sith team. He functions as a cleanser, keeping the rest of your team alive, helps take out the droids, and can put out decent damage on Grievous.

Territory Battles: Territory Battles are about attrition; your characters need to survive a prolonged, four wave fight. Savage Opress’ zeta gives him the survivability to do so, while still having the offensive capabilities to be useful. While Sith are not needed for any Special Misions, they are still a decent team for general combat missions.

Territory Wars: Being a defensive powerhouse, Savage Opress’ is a fantastic choice for a defensive team in Territory Wars. Aside from Sith teams, as mentioned before, he can be added to undergeared teams to lull the opponent into a false sense of security, and hopefully defeat some of their teams. Savage Opress also does well on offense, as his unique allows you to deal massive damage to a weakened enemy, and his survivability helps keep him alive long enough to do so.

How I Use Savage Opress: Savage Opress is an integral part of my main team at the moment. He has a place in my zMaul arena team, although that’s due for a change, as the meta has, and still is, shifting. Savage is also in my phase 1 HAAT team, which consistently does 350-400k damage. However, I find Savage Opress really shines in Galactic War. His constant healing and insane survivability makes him perfect for slipping into a lower power team for a little more “oomph”, especially when combined with a character like Sith Assassin, who can ignore protection and set up a devastating two hit kill.

My Rating of Savage: My rating for zSavage is 8/10. While he is definitely a beastly character with his zeta, and I don’t regret spending the resources, Savage’s AI is lacking, which seriously hampers how he performs on defense. Considering his zeta is based around survivability, it’s a definite issue.

I wish my schooling had been this well explained and easy to learn. Great work. You guys do such a good job providing detailed and useful breakdowns. Much love.