Gaming-fans.com is pleased to announce that we will be live blogging today as our Director of Content LJ looks to unlock Grand Admiral Thrawn at 7-stars. Fans can follow along throughout the day as he updates us all on his success or failure and what parameters went into each attempt. Anyone with questions or comments can feel free to leave them below. 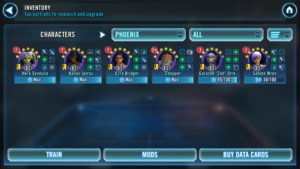 LJ: My first attempt failed, which you can read abut below. The Mods I am using follow our SWGoH Mod Reviews here on the site. I am not going to place my best mods on the Phoenix toons for the first attempt – I am more interested in learning what I can do and sharing that data. I hope you all find this information helpful long after the initial Artist of War Legendary event.

Battle #1 – Defeated the Stormtroopers without much trouble, everyone is at 90% Protection or better.

Battle #2 – Defeated the enemies without much trouble, everyone is at 80% Protection or better. Kanan’s unique with the counter attacks was very helpful.

Battle #3 – Targeted the Death Troopers first. Again, Kanan’s unique with the counter attacks was quite helpful knocking out a Death Trooper and a MagmaTrooper on the counters. Took out the Imperial Officer before the Stormtrooper Commander and will go into the 4th battle with nearly refreshed cooldowns.

Battle #4 – Right away the enemies all gain extra protection and Thrawn’s speed is obvious, using Fracture on Zeb to one-shot kill him. I dispelled a taunt so I can get to Thrawn and then realized how important Zeb is for this battle. After lasting for a few rounds they picked me apart before I could kill a single bad guy.

Changes: First off, I added an Omega to both Zeb’s and Chopper’s Unique so all used toons with a Unique (4 of 5) are maxed. I also geared Hera Syndulla up to Gear 9 with 4 of 6 filled. This upped her Speed by 6 to 155 before the Mod adjustments. For Zeb I added a Mk 6 Chiewab Hypo Syringe and on Ezra I added a Mk 3 Czerka Stun Cuff. For this attempt I am NOT changing mods, but I did upgrade all of both Kanan’s and Zeb’s mods so that all of theirs are maxed.

Battles #1-3 – Battles #1 and #2 went as planned, just like before. Battle #3 did not go as smoothly as before and I am on cooldown with a few key attacks.

Battle #4 – Chopper received the Fracture and my crew did survive longer than before. Zeb was again the first to die, and I was able to take out one Death Trooper while nearly defeating another Death Trooper before I was killed.

Changes: There is nothing I can do about Gear or character levels. Thus, if I am going to beat Tier VII it will be about the Mods OR I will have to get Sabine to 7-stars in the next 2 days and 13 hours… There are no tips here that can help. On Mods I pulled my best mods from my roster with the following info for you:

Battle #1-3 – The improvement in Speed is quite apparent right away as the first two battles were similar in the results only quicker attacks from my squad and fewer attacks from the enemies. Battle #3 went smoothly as I used mostly basic attacks and have all characters at 90% protection or better with cooldowns in good shape…

Battle #4 – Thrawn landed his Fracture on Kanan right away and RNG is not on my side as the taunting Stormtrooper and my cooldowns did not mesh well together. I was able to take out a Death Trooper with all 5 of my toons alive but keep missing out on stunning Thrawn.

Just killed off the other Death Trooper after Thrawn landed a second Fracture on Kanan. He followed it with a shot to kill Kanan but Hera saved her man. I am now up 5 to 4 on them.

Took out the Stormtrooper which leaves the two Stormtrooper Commanders and Thrawn himself. Trying to stun him is a huge pain in the butt.

Finally, thanks to Hera and Ezra’s specials, got Zeb to Stun Thrawn. Also took out the first of the two Stormtrooper Commanders and the latest Fracture on Chopper just wore off.

Karan just got back to full Protection thanks to the specials and uniques and Thrawn lands a 3rd Fracture on him, but I took out the final Stormtrooper Commander. Now it is just my 5 Phoenix toons versus Grand Admiral Thrawn.

Thrawn put up a good fight, but 5 on 1 is too much for anyone. Zeb, fittingly, landed the final blow.

Woodroward, a regular contributor to the site, also added his experience from the second Artist of War event in October 2017.

1. Don’t let your characters die. Play more defensively than offensively. Use your bonus protection abilities on cooldown as well as doing things like foregoing a killing strike to taunt.

2. Control Thrawn’s Fracture with taunts. Chopper is the ideal character to have fractured, which works well since he is quite fast naturally. Save Hera’s backup Plan for the person who gets fractured. I had lots of luck with backup planning chopper, having him taunt and then get fractured to death and immediately revive (I did it numerous times). Not only did I not lose the character, I didn’t even have to deal with him out of commision. Hera and Chopper should be a priority in speed from mods to make this happen.

3. Remove ALL buffs ASAP. There’s not enough time to take the stormtrooper out before the others and the death trooper’s buff is ridiculous. If you don’t wipe both of them, they’ll destroy your party. Luckily it can be removed with stagger (which sabine and zeb can generate) as well as with a buff wipe (Ezra and Chopper). No matter who is in your party, you should have the means to remove these almost right away. The only caveat I would give here is to taunt with Chopper right away instead of using his buff wipe to forestall the inevitable first fracture (controlling fracture is more important than wiping buffs).

4. Kill both Death Troopers one at a time.

5. Kill both Stormtrooper Commanders one at a time.

Obviously with the counterattack, some may die outside of the priority order and that is fine. Bonus deaths are just luck on your side. I’d try and do what I can to minimize protection loss the first 3 phases (taunting, bonus protection), but I would make sure to end phase 3 with all cooldowns ready to go for stage 4.

[…] to Star Wars Galaxy of Heroes, we now have the opportunity to unlock Grand Admiral Thrawn in the Artist of War event. Five weeks after introducing R2-D2 to SWGoH, unlocking Thrawn was what many feared – […]

[…] popular media partner Smithie D takes a look at the Artist of War legendary event to unlock Grand Admiral Thrawn with video of the 7-star tier of the event. He also gives us his […]

[…] mods for is Grand Admiral Thrawn. Available to unlock for free (this often gets overlooked) in the Artist of War event, Thrawn can be a real difference-maker on any […]

Thanks for the helpful info, Lj. This kind of insight can be crucial for players on a budget, or FTP.

[…] Order team needs to be to unlock BB-8. It is safe to assume that this will be much more like the Artist of War event to unlock Grand Admiral Thrawn than the Emperor’s Demise event for Emperor Palpatine. The Thrawn even is very difficult as […]

[…] set to start in a few hours, and our Director of Content will live blog his efforts. Much like his live blog of the Artist of War Grand Admiral Thrawn event, LJ will detail the characters used, levels, gear levels and mods for each First Order member used […]

SWGoH: Should I Buy the Phoenix Squadron Ultimate Bundles? - Gaming-fans.com

[…] hinted in the past weeks, Grand Admiral Thrawn has returned in his Artist of War Legendary Event! Acquiring Thrawn requires five of six Phoenix Squadron characters. Phoenix must be at 5* to unlock […]

[…] Ship Event has begin, and our Director of Content will live blog his efforts below. Much like his live blog of the Artist of War Grand Admiral Thrawn event, LJ will detail the ships used, levels and mod levels for each of the Rebel ships used to unlock […]

I don’t know what planet you’re living on, but my Phoenix squad isn’t putting hardly a scratch on phase IV tier 7. Geared as above, however, it seems as though some of the omegas are now zetas. Yes, they are lvl 85. I very much want a 7* Thrawn, but I don’t know that I can justify all those zetas for one toon. Any suggestions?

Well I beat it with the info provided and no Zetas. If you were to Zeta anyone, go Sabine, Zeb or Ezra – they are the best IMO.

It took a number of times through it, but yes, that’s the way to do it. As mentioned in the article about the rng, absolutely, it’s all about timing. Now to get Home One to 7* along with the fleet.

[…] Last Jedi in theaters – and our Director of Content will live blog his efforts. Much like his live blog of the Grand Admiral Thrawn and BB-8 events, LJ will detail the character levels, gear levels, mods, mod types and mod levels […]

[…] Be sure to also check out Mod Guides for individual Phoenix characters and read through the original Artist of War Live Blog. […]