Hello there. Welcome to the General Kenobi mods guide, the latest article in our series about the popular game Star Wars Galaxy of Heroes where we take a look at the best mods for each SWGoH character. While I do not claim to have all of the answers in this game, I do my research and have used every toon I write about extensively. These are mod recommendations and they are certainly not the only option. However we look to help players maximize their characters in SWGoH and we are always open to feedback if you have a mod setup that works well for your gameplay. 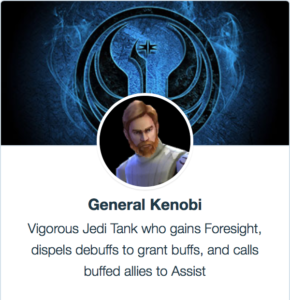 Today’s hero to review mods for is one of the most well-know Star Wars characters of all time – General (Obi-Wan) Kenobi. A Hero of the Clone Wars, General Kenobi had one of the most impressive resumes of any Jedi in history. He sliced Darth Maul in half and later killed him in battle, he killed General Grievous in battle and nearly killed Darth Vader before the black suit and mask. In his later life his teaching helped Luke Skywalker become a Jedi thanks in part to Yoda and Qui-Gon Jinn’s mastery of the Living Force and communication via Force Ghosts.

For the purpose of Star Wars Galaxy of Heroes, General Kenobi shards are the prize from beating the Heroic Tank Takedown (AAT). Early on it was debated how to use GK – as a tank or an attacker. It quickly became clear that he is most effective as a well-tooled tank, and thus, my suggestions for the best mods for General Kenobi are below.

Main Focus: Survivability. Defense and Health should be your main areas to focus on given GK is an awesome Jedi tank. Before the April 2019 mini-rework to synergies with Jedi Knight Anakin and Ahsoka Tano, I had Protection on the list as well, but the new changes have made Health a bigger deal. The main reason for the Health focus is the potential to gain Protection Up from either Ahsoka Tano or Jedi Knight Anakin, and given the Protection Up mechanic is based on Health in SWGoH, it makes sense to raise this number as high as possible. Since the introduction of Mods 2.0 the value of Defense mods is much higher as well, and as a result I would strongly urge players to consider a heavy focus on Health and Defense first. In addition, once you have him to Gear 13, General Kenobi’s Relic upgrade enhances his Health, Protection, Armor and Resistance, and any use under a Padme Amidala lead, especially on the Special Mission of Phase 1 of the Geonosis Territory Battle map, will need a very high Health stat.

Additional Areas to Focus: Speed, Tenacity and more survivability. Speed is key since you want General Kenobi to dispel the debuffs placed on your squad and use his Lead the Charge special for the burst attack, so work hard to get high Speed secondaries when possible. Personally, I have experimented with an arrow mod (Receiver) on GK with a focus on Defense and a high Speed secondary, but have since changed back to a +32 Speed arrow with high survivability secondaries. Tenacity is important to ensure he gains Protection Up and taunts to protect his teammates, so be sure to give him a strong Tenacity stat. Given his kit and his role in the Jedi faction in SWGoH, maximizing his survivability with more Health and Protection should continue to be top-of-mind.

Speed Priority: 5/10 – General Kenobi is a strong character and incredibly valuable for endgame players in certain situations, but he simple does not warrant the use of your best Speed mods or Speed secondaries.

In-game Mod Recommendations: Defense is what used to be the in-game focus, but since the update in April 2019 it is now Tenacity. I see the thinking here – you want GK to taunt so keeping Buff Immunity, Shock, etc. off of his makes sense. However, this is the standard way these recommendations work from CG, so for those looking for more high-level, specific instructions see my recommendations above.

While General Kenobi is a highly-used character in Galaxy of Heroes, it is therefore be wise to mod him with the same level of importance. I have two sets of Health mods and a Defense set on mine, but I may look to add more Tenacity in the near future. Note that because he is the captain of a Capital Ship, having your most advanced, sliced Tier 6 mods and a high Relic level on GK is more important than on other characters. Here is my preferred mod setup for General Kenobi:

SWGoH: Should I Buy the Code Name: Fulcrum Packs?

[…] Gameplay: In all honesty, the overwhelming feeling I got playing with zMaul teams was frustration. As the arena became over saturated by Darth Maul led teams, battles quickly devolved into RNG fests, with the outcome largely depending on who got luckier with dodges. Putting this aside however, Darth Maul teams are great against other teams, and there’s something immensely satisfying about seeing one of your characters dodge a full team attack courtesy of General Kenobi. […]

SWGoH Advanced: Armor as a Function of Defense - Gaming-fans.com

[…] a completely upgraded General Kenobi as an example, it’s easy to check on SWGOH.GG, so let’s work through […]

[…] Today’s toon to review mods for will be Emperor Palpatine, one of a select few characters who are opened and starred up through legendary SWGoH events. The Emperor of the Galactic Empire is a Sith and Empire character with a fantastic leader ability. Personally, I used Palpatine in the Arena for several months after unlocking him in the first Emperor’s Demise event as I was fortunate enough to open him at 7-stars earlier than most. He spent time on a Captain Phasma-led team at first, then alongside Wiggs during the Wiggs META before then moving to my Zaul META Sith team. In addition, I used Emperor Palpatine in Phase 3 of the Heroic Tank Takedown Raid as part of the Chirpatine strategy when my Guild was working toward unlocking and strengthening General Kenobi. […]