Who doesn’t love clones? Clones were the focal point of Episode 2, prominent players in Episode 3 and the stars of 6 excellent animated seasons. Cody is a clone who had a big role in it all – a right hand man to General Kenobi, this clone in particular was “born” to be a leader. But sadly, until Zetas came to Star Wars Galaxy of Heroes, he was pretty much dust on the shelf. 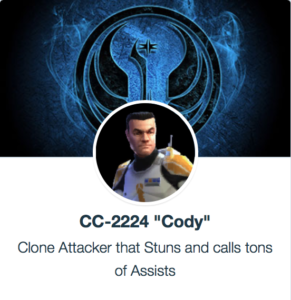 But now with Zeta Materials in SWGoH I am proud to present, the Man, the Myth, The Legend, Ghost Company Commander Cody.

Where this zeta works: There are two parts of this leader ability that are worth something, the boost to Critical Chance and the Protection recovery. Because the protection recovery only works for Clones you really want to use Cody in a team that is mostly made up of clones, otherwise there are far better leader abilities out there.

With a Cody leader Zeta you will find clones working well in Rancor, good on Offense in Arena, Excellent in Galactic War, and total super stars in the Heroic AAT raid. In my opinion this is one of the best Zetas to invest in, but you really need to have a fully geared team of Clones to make it worthwhile.

If you keep your crit chance high, and use a Cody leader you can be almost guaranteed that Cody will reset the cool down on his 212th Attack ability every time he uses it, that means that whenever Cody takes a turn, everyone takes a turn. It also means for all the Clones in that team they regain 5% of their max protection every time Cody takes a turn, and they regain another 5% (most likely) on their own turn by using a basic ability. Couple this with having Echo on the team and you see everyone recover 7% of their health as well whenever Cody attacks. In short Cody leading a team of clones is a healing/recovery machine.

Squad Arena: Clones are a ton of fun in the Arena, but they do get stumped by two configurations, 1st being a team with Zeta Barriss, with all the critical hits the Clones can land, and the high number of attacks they have, you basically can’t out-damage the healing they give to a Zeta Barriss team.

Ironically they also suffer against a Rex lead team, again because clones rely so much on critical hits they just feed an enormous amount of turn meter to the other side and it just does not go well.

So yes in arena, they are fun, they will win on attack, but they will do terribly on defense. They need to focus fire on key targets to win, and the AI never does this. The AI also does not properly use Cody to maximize his turn meter and use of the 212th attack, so you will see many wasted attacks on his mass driver AOE.

Rancor: Clones are a great team to throw into phase 4 and hit auto on as the constant healing will keep them alive until enrage and they dish out some great damage with only a single target to focus on. But with only Rex to provide some turn meter removal they really are not a team you want to use in earlier phases and they will never solo the Rancor Raid as we know it today.

AAT: Phase 2 you can use a Cody lead with Fives, Clone Sgt, Echo and one of the Jawas, the strategy is simple – topple the tank and blast away until it gets back up and repeat. Here you are relying on the Clones’ healing provided by Cody and Echo to keep them alive through the worst the tank can dish out, while your Jawa companion provides extra attacks by calling an assist whenever he is called to assist by Cody and his 212th attack.

In Phase 4 you team the clones up with Princess Leia as the 5th member of your squad and follow the same strategy, the main difference here is that Leia provides a constant buff to the team (hopefully) so that you never take a ton of damage from the air strike that comes after every topple.

Territory Battles: Much like Zeta Barriss Offee, Cody makes a clone team really shine in Territory Battles – Hoth. Now I have not personally tried this team in the later phases but the huge health and protection regeneration make this team a real beast to wear down. In short, all of those teams that seemed like they were only good for raids, they have a new home now.

My use of Zeta Cody: Cody took me a while to apply a Zeta to, mainly because it is a Zeta that is utterly useless if you don’t have 3-4 other clones starred, leveled and geared to a reasonably high level. There is no point in the healing protection if you barely have any to start with. I have mainly restricted my use of Clones to GW and AAT raid, most days Clones are able to clear 8-11 nodes of GW for me and I usually have to use another team for a Zeta Barriss node or right near the end.

My Rating of Zeta Cody: I would give Zeta Cody a solid 8/10. If you struggle with GW at all this can truly be a game changer, and if your AAT scores are low this Zeta can help you wherever you need it most whether that is Phase 2 or Phase 4. Even in arena if you are not fighting for a top spot daily I am sure you can have a ton of fun using this squad in the lower rankings and see it rip through a lot of the opposition.

[…] Wren’s Zeta is not going to have the impact that a Zeta Cody or a Zeta Finn will have in the Tank Takedown Raid, but honestly, there are only a handful of real […]