For a long time this guy was the META, reasonable damage on his basic plus turn meter reduction, a special that damages, dispels and give offense up, and a leader ability that makes Jedi faster. Not to mention that this is the guy who trained the legend, Obi-Wan Kenobi, the guy who is not just an old wizard, but one of the greatest generals of the Clone Wars. That is a lot of legacy to live up to, but Qui-Gon’s Zeta Leader Ability manages it. 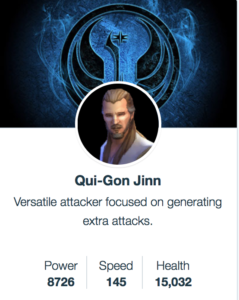 Where this zeta works: This Zeta is really not complicated; it works with Jedi. It is completely faction specific and no one else get any bonuses except Jedi.

But what exactly does it do? Well with the Zeta the speed gain is increased from +25 to +30; this is essentially an extra speed arrow mod for every Jedi on the team.

Next each Jedi gains offense equal to three times their speed. If you are really focused on making a viable Jedi team you are probably aiming to have all of your Jedi at 200 speed or better, so that means on average each Jedi is gaining +600 offense, which I do not need to tell you is a huge amount.

Finally, each Jedi starts each encounter with foresight, and regains foresight whenever ANYONE is defeated. So in a match you win easily, each Jedi will have foresight in place to avoid 5 attacks, one to start the match and 4 more when the enemies fall. Once the 5th guy falls the match is over. But still that is 25 times your team would take damage or a negative effect that will likely be avoided from this leader ability.

Squad Arena: Jedi for the most part hit like wet noodles, but the damage boost from QGJ zeta at least makes their damage respectable. You won’t finish many matches in less than a minute, but you also won’t time out on matches either.

Personally I have been running a Zeta QGJ lead in arena since January 2017, and I have been placing typically 1st at payout since February 2017, using Jedi.

Jedi definitely make you a more tempting target for many people but the absolutely huge amount of evaded attacks from the QGJ lead and having Yoda and General Kenobi in the squad as well can make for a very annoying team to face. This team can easily win on offense and will even pull out a few wins on defense as well. 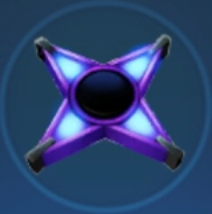 I currently run one of two configurations depending on my opponent.
Qui-Gon Jinn lead, General Kenobi, Yoda (Battle Meditation Zeta) Jedi Knight Anakin, and in the 5th spot with Darth Nihilus, or R2-D2 (both Zetas). In very specific circumstances I will sub in Zeta Barriss.
With the speed boost from QGJ and moderate speed mods (I only have a single speed mod at +15) I am able to out speed any team except Zeta Maul and Sith Assassin.

On Offense the only teams I ever need to avoid are Zeta Maul or Zeta Vader with either B2, or a Sith Assassin that will move before my Zeta Yoda. Without a B2 or faster Sith Assassin even these teams with all their anti-Jedi powers are no match for a Zeta QGJ jedi team.

Rancor: While Qui-Gon Jin is very useful in the rancor, his Zeta does nothing for you here. I generally find it more effective to use Anakin as a leader since even on the pigs deaths are infrequent enough that the extra foresight is not worthwhile. And the speed is less necessary when you are turn locking the rancor or pigs.

AAT: Phase 1 of the AAT is the only place to use Zeta QGJ. You basically have a choice, use Anakin for a little more damage, or Zeta QGJ for a little more survivability. Both are valid options and I have posted scores of 300k-400k using both as leaders. I do find that Anakin lead is a little more consistent, but QGJ can peak a little higher.

Territory Battles: If you don’t have General Kenobi to act as a huge tank with Zeta Barriss Offee, then try putting this fellow as your lead, throw in Yoda and some good Jedi damage dealers and you are off to the races. With 6-8 enemies per way you have all the foresight you could want making your durability absolutely insane. Its unfortunate really, Jedi shine so brightly in Territory Battles – Hoth, but there are just not a ton of places to use them with all the Rebel requirements.

My use of Zeta Qui-Gon Jinn: As mentioned above this has been my arena leader for months now, he is a strong and effective squad leader, but ultimately acts as somewhat of a target for other teams due to the low overall use of Jedi teams in arena. For Raids I rarely if ever use him in a leader spot, but he still sees use in my teams.

My Rating of zQGJ: I would give Zeta Qui-Gon Jinn a respectable 7/10 He works well in Arena and offers an alternative to the usual META. In raids and GW he is average at best. But most importantly in somewhat of a rare move for most Zetas he is a character you normally want to have leveled and geared regardless of having a Zeta. He has a place in your roster anyway, so if you want to run a Jedi team you are really just using up a Zeta, not a Zeta and a pile of gear to make that one Zeta useful.
If this ability were on a character like Plo Koon I would rank it much lower but because everyone should have Qui-Gon Jinn in their roster anyway it is a much easier Zeta to justify.

[…] to render no damage and keeping almost all debuffs off team members for two turns. Paired with Qui-Gon Jinn (with a Zeta on his Leader ability), General Kenobi, or Barriss Offee, a Jedi team becomes formidable in […]

[…] ensures that she lands Ability Block consistently and often, which can be useful in P1 of HAAT under the right leadership. Luminara’s healing ability also gives her strong use through much of Galactic War, and using […]