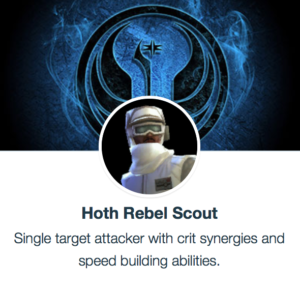 Today’s character to review mods for is the Hoth Rebel Scout. A somewhat overlooked Rebel character, his value was not realized until being required in the Hoth: Rebel Assault Territory Battles event. While Hoth Rebel Scout does have a decent kit, the 2020 addition of Mon Mothma in SWGoH has brought HR Scout back to life to an extent. Let’s take a look at which mods will best enhance his kit in the game today.

Main Focus: Offensive stats. It’s hard to pin a single stat as the most important for Hoth Rebel Scout, so focus first on the offensive stats – Offense, Critical Chance and Critical Damage – to ensure he hits harder no matter how he is used in-game. Given Hoth Rebel Scout’s Relic in SWGoH enhances his Damage, CC and CD, and it is clear that this is how the devs intend for him to be used.

Additional Areas to Focus: Potency, Speed and survivability. While scoring a critical hits from his special attack grants him 100% Turn Meter, adding Potency to land Stun on any hit from Rebel Assault is also a wise choice. Hoth Rebel Scout is not likely to be a Top 50 character on your roster, so the use of top-tier mods with +15-25 Speed just is not feasible, nor is it really needed. The potential Turn Meter gains from his attacks and a strategic pairing with Pao can more than make up for any high Speed secondaries, but if you have strong mods with high offense and decent Speed in the secondary stats, HR Scout is a good fit. Any added survivability is nice just to keep Hoth Rebel Scout alive. Tenacity is not really needed given Ability Block keeps him using his basic, which may be the better of the two attacks, but keeping HR Scout alive with added Health, Protection and Defense will be amplified if used under a Mon Mothma lead.

In-game Mod Recommendations: Critical Damage & Critical Chance. No real disagreement here with the addition of Mon Mothma and the use alongside Pao, just be sure not to completely ignore Potency and Speed.

[…] toon to review mods for is the Hoth Rebel Soldier. Not to be confused with Hoth Rebel Scout, HR Soldier is another Rebel character who is often overlooked due to having little use in the game […]