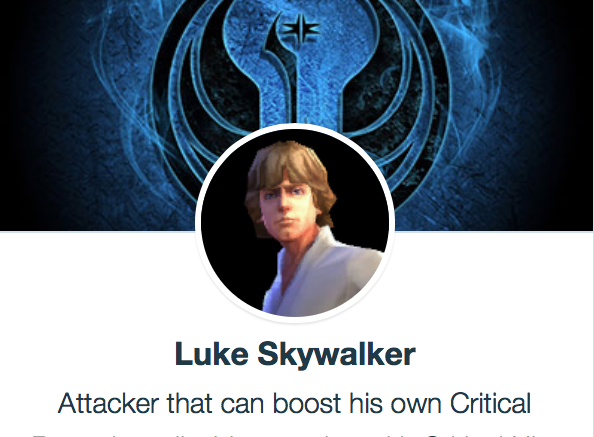 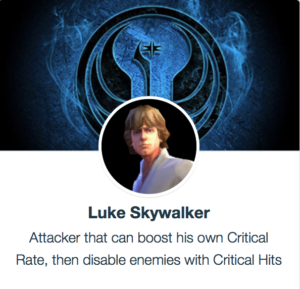 Today’s toon to review mods for is the biggest name in the Star Wars Galaxy – Luke Skywalker, now Farmboy Luke. While the Luke Skywalker we have had in SWGoH since day one is not the equivalent of the greatest Jedi to ever live, or even a Jedi, the introduction of Commander Luke Skywalker to the game in August 2017 was much-needed. Farmboy Luke’s kit in this game was rather bland focusing highly on critical hits, but an August 2017 rework will give him a nice boost. Let’s take a deeper dive into his abilities and how to mod “Farmboy Luke” in SWGoH now that we know the details of his rework.

Main Focus: Speed. I am once again sticking with Speed because it is so annoyingly necessary. Luke starts off with a base Speed at 125 (expanded to 137 with the addition of new Gear 12 pieces) which is not that bad but also not great. Building him to the 180-200 range would be important to ensure he hits more often so you can use the critical hits to your advantage.

Additional Areas to Focus: Critical Chance first, but then Critical Damage and survivability. Looking at his basic, Frontier Marksmanship, Luke gains 40% Turn Meter on a critical hit and inflicts a Damage Over Time debuff for 3 turns. His Bullseye special Stuns the target on a critical hit and inflicts Defense and Speed Down. Meanwhile, his unique, Draw A Bead, grants Luke a 25% Critical Chance and 10% Critical Damage (stacking) until the end of the encounter with his Zeta ability.” Similar (but obviously not identical) to the Asajj Ventress unique Zeta, if you have 216% Critical Damage in a long encounter (Territory Battles and Raids) this can stack to make Farmboy Luke very powerful.

I recommend the use of six Critical Chance mods on Farmboy Luke with as much Speed as possible before the rework, but with the changes I am making an adjustment to go with 2 CC mods and 4 Critical Damage mods for the CD boost. Thus, here is my recommended approach for mods on Luke Skywalker:

[…] Jawas or a return of the special event units for the Flash Events. Also, be sure to check out the best mods for Luke Skywalker as you […]

[…] Farmboy Luke Skywalker – Luke’s basic attack got some offensive boost from the rework and his Bullseye special can dispel all buffs on the enemy. His unique, Draw A Bead, now have a Zeta Ability which reads “At the start of each of his turns, Luke gains 10% Critical Damage (stacking) until the end of the encounter.” This stacking CD can be incredibly valuable in Raids where, if he stay alive long enough, he can do massive damage. […]

[…] the biggest name in the Star Wars Galaxy – Commander Luke Skywalker. Not to be confused with Farmboy Luke Skywalker, this Lightsaber-wielding Rebel is an attacker who is described as a “Determined Rebel hero […]

His base Speed is indeed 125 according to SWGOH.gg which recently was increased to 137 with the new Gear 12 pieces. Base Speed is how fast he is maxed out.