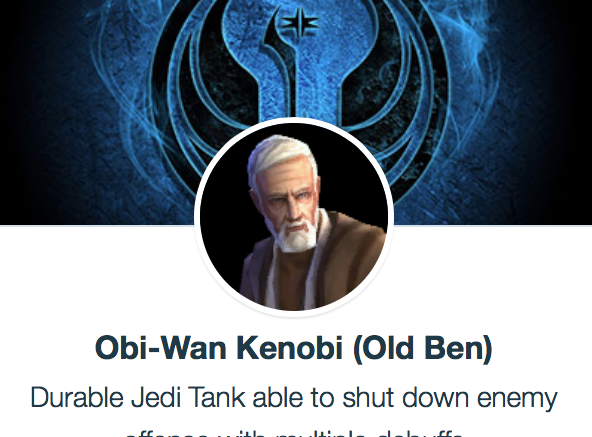 Welcome to the Old Ben mods article, the latest article in our series about the popular game Star Wars Galaxy of Heroes where we take a look at the best mods for each SWGoH character. While I do not claim to have all of the answers in this game, I do my research and have used every toon I write about extensively.  These are mod recommendations and they are certainly not the only option. However we look to help players maximize their characters in SWGoH and we are always open to feedback if you have a mod setup that works well of your gameplay. 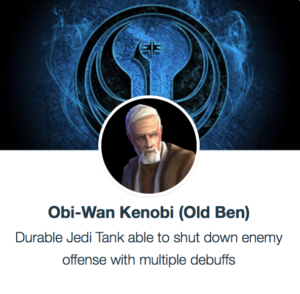 Today’s character to review mods for is Obi-Wan Kenobi, aka Old Ben. One of the authors of the former “dodge Meta in SWGoH,” Old Ben was a tricky farm in the early days, but a nice character to have. For the Legendary event to unlock Commander Luke Skywalker, Old Ben is one of 5 characters, along with R2-D2, Princess Leia, Stormtrooper Han and Farmboy Luke, needed at 7-stars. Add in a August 2017 rework and Old Ben was like New Ben at that time. With a solid kit that protects his allies, let’s take a look at the latest Mods Guide to help you in your attempt to unlock Commander Luke, or other Lukes, or just build up Old Ben for other areas of the game.

Main Focus: Survivability – health, protection and defense – should be the main focus to make Old Ben the most annoying character possible. Old Ben did not originally taunt, but after an August 2017 rework, survivability became the key element. His Taunt and then Taunt again can be a pain, especially since he also comes with some of the best defensive stats in the game, and Old Ben’s Relic stat increases scale well with this recommendation.

Additional Areas to Focus: Potency, Speed, Tenacity and more survivability. Old Ben’s kit focuses on his ability to use his “mind Tricks” special to inflict the Ability Block and Offense Down debuffs on enemies while avoiding hits frequently. Since the Mind Tricks special can land both debuffs on enemies, you will need high Potency to ensure this is more likely to happen. Speed is important because without Speed to get to the opportunity to use the Mind Tricks and Devoted Protector specials, Old Ben is not going to be effective enough. Thus, ramp up his base Speed which is below average at 138. Note that some strong GAC and Territory War counters may ask for even more Speed – keep this in mind. Tenacity could also be included in your decision on Mods since you want Obi-Wan landing the Mind Tricks debuffs, and if he is Stunned or Ability Blocked that cannot happen.

Speed Priority: 5/10 – Unless you are using Old Ben in a specific counter needed in Territory Wars or the GAC, he is average on the Speed Priority list. However, many of the top guilds in SWGoH have very creative counters and very, very specific stat goals to make those counters work, so very fast Health, Defense or Potency mods could be a perfect fit with Old Ben.

In-game Mod Recommendations: Defense & Potency. Yes, Defense & Potency are important stats to Old Ben if you want to enhance his kit, but given his primary role is to absorb attacks and protect his Rebel or Jedi allies, going with just survivability mods (Health & Defense) may be best for your gameplay.

I recommend the use of Defense and/or Health mods on Obi-Wan Kenobi with solid Speed and Potency. Thus, here is my recommended approach for mods on Old Ben:

[…] Obi-Wan (Old Ben) Kenobi – The Dodge META with Obi-Wan Kenobi (Old Ben) is in the past, and especially with the rework of Old Ben. Instead of Evasion Up on use of his basic attack, he now gains Potency Up which sets up his Mind Tricks special nicely. With an Omega the basic now reads “This attack can’t be Evaded and inflicts Evasion Down for 2 turns.” Mind Tricks no longer can be evaded and now reads “Jedi and Rebel allies gain 3% Turn Meter for each effect Resisted” in addition to previous bonus of “+15% Turn Meter Reduction Chance.” The new special, Devoted Protector, reads “Old Ben gains Taunt for 2 turns. When this Taunt expires, Old Ben gains Taunt for 1 turn. All allies gain Defense Up for 2 turns.” This special will counter Grand Admiral Thrawn nicely forcing the fractured Old Ben to regain taunt and keep attention off his allies. Finally, the unique If You Strike Me Down now reads “Whenever another Jedi or Rebel ally takes damage, Old Ben gains 5% Turn Meter. The first time Old Ben is defeated, all allies gain Offense Up and Speed Up for 2 turns, recover 50% Health and 50% Protection, and gain 25% Turn Meter.” […]

That’s great info. It’s practically impossible to even come that close to getting all those mods. Better chance at winning Powerball lottery for $300 million. I’ve been playing a year, 44 toons maxed and I have 2 +30 speed arrows . I try to farm mods all the time. I don’t have the crystals or credits to pay retarded amount in mod store.

What does this mean?
“focus on health of defense”
This is what you wrote for the triangle

It now says “focus on health or defense” – that was a typo. Sorry!