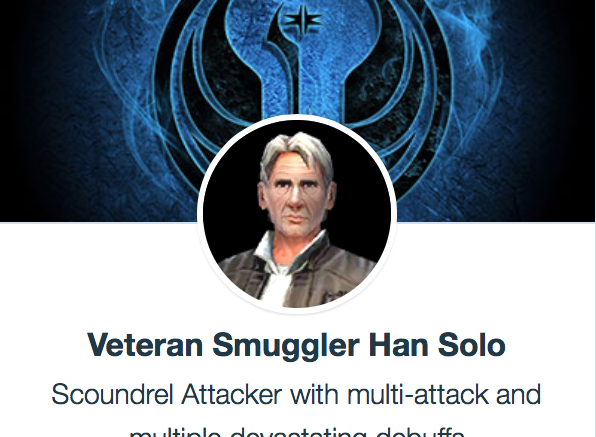 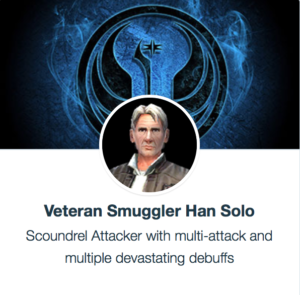 Today’s character to review mods for is one of the most well-known heroes of the Star Wars saga – Han Solo, only now one of five iterations in SWGoH, this time as Veteran Smuggler Han Solo. This version of Han Solo, along with Veteran Smuggler Chewbacca, are designed to be “excellent in Territory Battles, where they are able to really shine,” per what we were told in September 2017. As I write at that time, “of course if they are at 3-stars and part of a major Gear crunch in SWGoH, both will likely be stuck on the bench for most in Territory Battles, far down the list from those actually used in Combat Missions.” Fast forward two years and both have been stuck on the bench for most players after needing them to unlock Rey (Jedi Training) and for little more. But once again the importance of VS Han has risen after it was announced that he is now a prerequisite to compete in the new Galactic Legend event to unlock the 2020 version of Kylo Ren.

Main Focus: Speed. Speed is the one constant in Star Wars Galaxy of Heroes – without it you cannot be competitive. Look to get Veteran Smuggler Han Solo as high as possible depending on how valuable he is on your roster. The fastest of the five Han Solos in Galaxy of Heroes with a Max Speed of 165, he is the only version I would even consider using a Speed set on, but read on and consult your own mod inventory.

Additional Areas to Focus: Potency, Critical Chance, Critical Damage and survivability – specifically health. Potency will boost the chances to land debuffs, specifically Stun and Ability Block, when using the Can I Try That? AOE special attack. Then, with a debuff on the enemy already, VS Han’s Trueshot basic becomes even stronger so that he can shoot twice and inflict Stagger on the enemy. CC and CD are both important, and potentially game-changing, thanks to his Partner in Crime unique which grants him +25% CC and a stacking +20% CD when Veteran Smuggler Chewbacca takes damage. Finally, survivability of all kinds – Defense, Health and Protection – but specifically in the form of health, is important to keep him alive longer. His +50% Health Steal from the Partner in Crime unique is enhanced by the +17,892 Health boost gained from Veteran Smuggler Han Solo’s Relic upgrades, where he also gains significant Physical Damage, Physical Critical Chance and Critical Damage.

In-game Mod Recommendations: Critical Damage & Critical Chance. While I do not disagree with these two stats, a case could be made for a Speed set over a CD set given his 165 base Speed. Note that once Gear 13 and Relics are in play, VS Han maxes out at over 84% CC plus the +25% CC gained from his Partner in Crime unique. As a result, I would suggest moving to a Health set in place of CC once Gear 13 is reached.

I recommend the use of four Critical Damage and two Critical Chance mods on VS Han with as much Speed and Potency as possible. Once he hits Gear 13 I suggest a change to a Health set in place of the CC mods, as indicated below. Thus, here is my recommended (ideal) approach for mods on Veteran Smuggler Han Solo, aka Old Han:

The best thing is that Veteran Han needs that relic just so he can show up in a cutscene and get run through. Smegler Chewbacca sounds like something from an adult movie, that ends with Chewie having to get shaved afterward because it’s too hard to clean all that out of his fur.