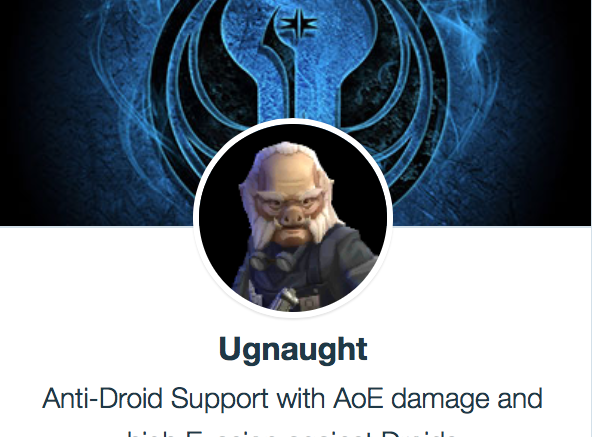 Welcome to the latest article in our series about the popular game Star Wars Galaxy of Heroes where we take a look at the best mods for specific SWGoH characters. While I do not claim to have all of the answers in this game, I do my research and have used every toon I write about extensively. 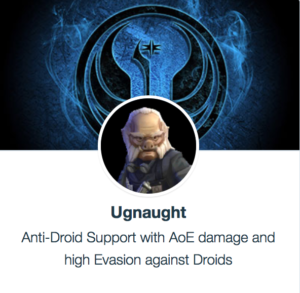 Today’s toon to review mods for is one I used a lot before making the jump from the t6 AAT to HAAT – Ugnaught. Billed to be a strong character against droids, Ugnaught can be effective, but elusively so, in the Tank Takedown Raid. Now all of us who got him to 7-stars are being rewarded (slightly) for that effort with the occasional need in Territory Battles – Hoth Platoons.

Main Focus: Like everyone in the game, Speed is the key for Ugnaught, and while I rarely go with Speed mods as the main focus for a character, I will do so for Ugnaught. His base Speed is above average – 130 – so building upon that and getting him into the 200s should not be a major challenge if he is a character you are investing heavily into (or juts have a deep, deep roster).

Additional Areas to Focus: Potency, Offense and Survivability. His special attack, Droid Experts, is an AOE attack that deals special damage to all enemies with a 75% chance to stun droids for 1 turn, so get your Potency up to maximize the effectiveness of this attack. Survivability will keep Ugnaught alive longer, which, given his 9% evasion bonus for each Droid enemy, could make Ugnaught very annoying for your opponents. Finally, he hits Droids hard, so a little more offense is not a bad thing.

Ugnaught is a niche character who has very little place in Star Wars Galaxy of Heroes. Outside of the Tank Takedown, I cannot see many places where any Level 85 player would use this toon, but nonetheless I prefer the use of 4 Speed and 2 Potency mods for Ugnaught:

[…] Takedown Raid, but once players made the jump from the Tier 6 AAT to HAAT Dathcha became, much like Ugnaught, an afterthought. Personally I saw mild success with Dathcha in Phase 3 of HAAT as a second or […]