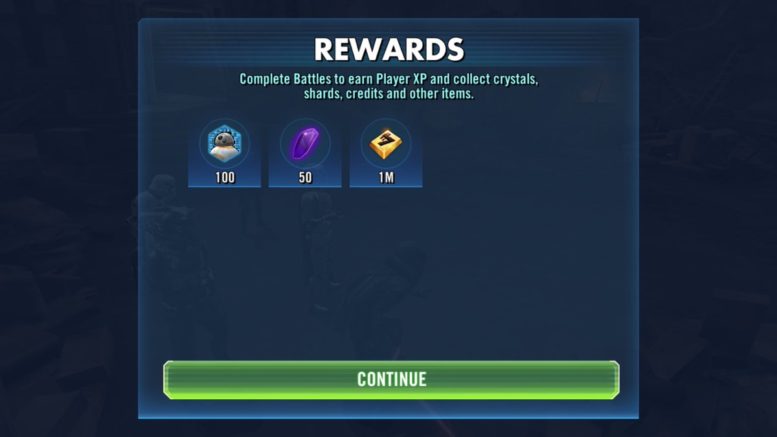 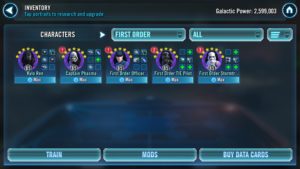 The Pieces & Plans BB-8 Legendary event is set to start in a few hours, and our Director of Content will live blog his efforts. Much like his live blog of the Artist of War Grand Admiral Thrawn event, LJ will detail the characters used, levels, gear levels, mods, mod types and mod levels for each of the five First Order members used in the event to (hopefully) unlock BB-8.

The original BB-8 event is set to start at 3 am ET and LJ plans to have his results posted by noon ET on Thursday. Keep checking back and hit “refresh” in your browser for updates to this page with all details below and be sure to add your comments below on your experiences as well.

Tiers 1-6 were actually more difficult than I expected – the easy thing to notice immediately is the SPEED of the Resistance toons, Veteran Smuggler Han Solo & Chewbacca included (even though they are not Resistance?). 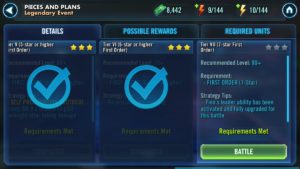 Using the team below the first 5 tiers were still easy since you can absorb their shots, something that is important given you get attacked 5 times before you get a chance to do anything. The Tier 6 attempt saw my First Order Stormtrooper lose all of his protection, but the win was never in doubt. All of the Tier 1-6 attempts were with fully maxed mods – for Tier 7 I am going to test things out with lesser mods since my toons are all Gear 11 already as I want to give the readers more variables to consider. With that having been said, here we go with the Tier 7 Pieces & Plans attempt to unlock BB-8 fighting the Resistance with a Zeta Finn lead.

BB-8 went first applying Secret Intel onto Finn and Rey. Now attacking, I focused first on VS Han Solo and took him out. Using Phasma’s Victory March special to grant TM to all allies, I then has FOST taunt and focused on Chewie and eliminated him rather quickly. Kylo stunned Rey and got rid of her protection, but BB-8 used his special and green icons appeared everywhere. Then Finn landed Expose debuffs all over my team and I somehow do still have a chance to attack. I was able to take out Rey leaving just Finn and BB-8 to defeat. Since none of the 11 buffs between the two characters are Tenacity Up, I used Kylo’s Outrage special to try to stun Finn and swung and missed. Focusing now on Finn, it was clear that the Resistance toons are not nearly as fast as the previous tiers. I finally got another turn from Kylo and stunned Finn and finished him off after 7-8 hits. This is where a Zeta on Captain Phasma or FOST would have come in handy since the extra attacks do not require added turns. Stunning BB-8 with another Outrage from Kylo, the light at end of the tunnel is in front of me. Despite having Foresight, I was able to continually attack a stunned BB-8 and finish him off with ease. Only FOST had lost his protection when things wrapped up.

With BB-8 now unlocked it is time to put the best mods on BB-8 possible to maximize his abilities in Star Wars Galaxy of Heroes.

Sparrow’s notes included that while his characters were maxed out, he never lost a battle, defeating the Resistance in his first try. In the final, Tier 7 battle, only Kylo Ren was left and his Zeta ability to recover protection was the key. While he says he thinks that with good rng it could have been beaten without the Zeta on Kylo, I personally am high on Kylo’s Zeta and feel it is always a good investment.

Woodroward’s notes stated – First Order Officer would go first and fill Kylo’s turn meter. Kylo would stun Rey, which hopefully would lead to her dying before actually attacking. From there it was focused damage on the kill order I was following using my offensive specials on cooldown. I avoided taunting with FOST unless FOTP or Kylo were low on health.

I breezed through the first five tiers. Tier 6 hung me up until I leveled Kylo Ren from 78 to 82 and put the omega on his basic. I beat it the first try after doing so. Every time my kill order was Rey, Han, Chewie, BB8, Finn. I beat tier 7 on the 3rd try.