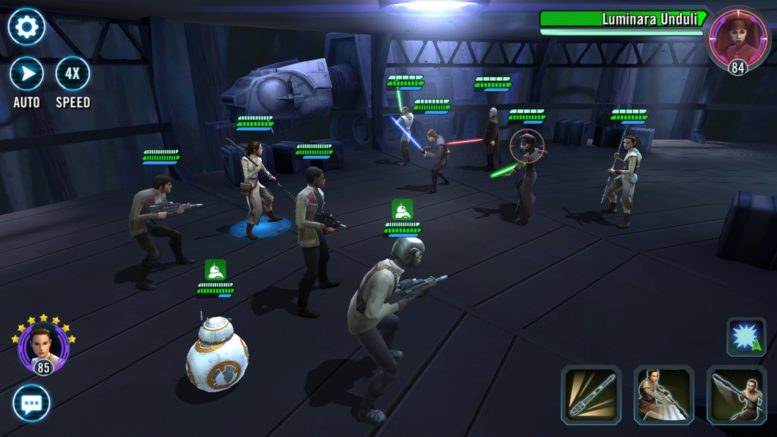 Welcome to the best mods for Rey (Scavenger), the latest article in our series about the popular game Star Wars Galaxy of Heroes where we take a look at the best mods for specific SWGoH characters. While I do not claim to have all of the answers in this game, I do my research and have used every toon I write about extensively. These are mod recommendations based on the character’s kit and actual gameplay to help you in your quest to dominate the Galaxy of Heroes holotables. 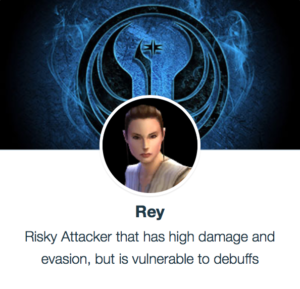 Today’s character to review mods is The Force Awakens star Rey. In the early days of Star Wars Galaxy of Heroes, one of the first METAs (what does META mean?) we ever saw was the Rey META – the use of Rey (Scavenger), and a fast Rey, was the difference in winning and losing in the Squad Arena. However, what is effective today will not always be effective tomorrow, and Rey went from possibly the top character in SWGoH to not even a top tier Resistance character the game has evolved. Of course after it was announced that Rey (Scavenger) is a required character to compete to open her Galactic Legend version, her value increased overnight. Let’s look at how to mod Rey (Scavenger) for maximum impact in SWGoH.

Main Focus: Like everyone in the game, Speed is a heavy focus. With a 184 base Speed, Rey is one of the fastest in the game, so build on that and annoy the heck out of your enemies with a 280+ Speed if this version of Rey is important to your team. Speed and Offensive stats were critical to her effectiveness at one time in the AAT Tank Takedown or against Darth Nihilus in Phase 1 of the Sith Raid, but again, SWGoH continues to evolve. Because of the high base Speed, the option of a 4-mod set of Speed mods is certainly in play given that when maxed out at level 15 it provides a 10% (18 Speed) boost.

Additional Areas to Focus: Offense, Critical Chance, Critical Damage, Tenacity, Potency and survivability. Rey (Scavenger) has a near useless Zeta upgrade, and the main route you want to take alongside Speed is enhancing her offensive stats. This means added Offense, Critical Chance and Critical Damage should be your focus with high Offense coming from the secondary stats on your mods. The high CC helps Rey (Scavenger) really shine under a Rey (Jedi Training) lead where critical hits apply the Expose to the enemies. Tenacity is valuable on Rey because her unique unique, Focused Strikes, gives her “+25% Offense as long as she doesn’t have any negative status effects,” aka debuffs, so raise her Tenacity to keep the red spots away from her head. Rey (Scavenger) is squishy, so survivability in the form of Health, Protection and Defense is a must, but aim for Health above the others if you still use her in Phase 1 of the Sith Triumvirate Raid. Note that Rey (Scavenger) has nice Relic gains in Health, Physical Damage, CC and CD, so this means that the devs have designed her strengths around these stats, so mod her to enhance them if you can.

In-game Mod Recommendations: Offense & Tenacity. While I cannot disagree that these are both important, Critical Damage and Critical Chance mods should also be in play for this character, especially after seeing how her Relic upgrades impact her stats.

As Star Wars Galaxy of Heroes continues to evolve, one thing the dev team does well is matching up the strengths of new characters with their faction. Rey was more of a stand alone character than an ideal Resistance character in my opinion, but the introduction of Rey (Jedi Training) t0 the game in December 2017 changed this completely. With RJT’s leadership a critical hit lands and Expose debuff and the resulting TM gain. While I have chose a set of four Speed mods on Rey (Scavenger), going with Offense or CD mods could work out very well also, provided they have very high Speed secondary stats. Either way, focus on Speed, CC, CD and Offense with some Tenacity and you will enjoy using Rey in multiple SWGoH game modes.

Here are my recommendations for the best mods approach for Rey (Scavenger):

I am top 5 in my arena with JTR lead, zFinn, bb8, R2, and Scavenger Rey. She is faster and hits harder than Thrawn. I have her mods cd/cc but might switch her with JTR who has cc and speed. Why do I not see a lot of finn with resistance teams? He clears debuffs well and inflicts expose.

Actually, Potency is not relevant, as her Daze can’t be Resisted