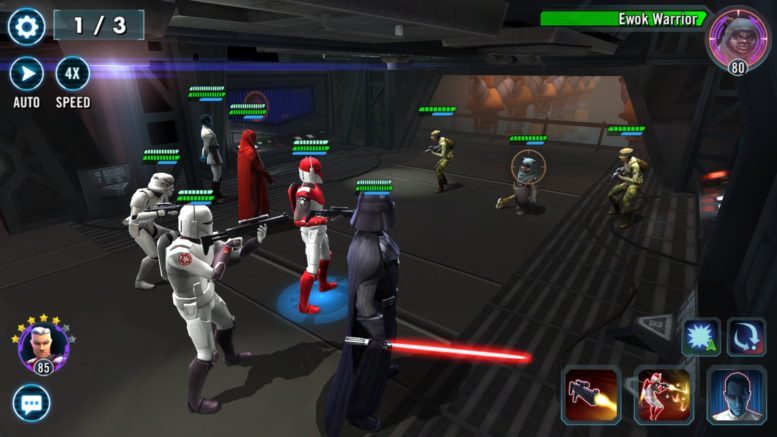 Welcome to the best mods for Gar Saxon, the latest article in a series about Star Wars Galaxy of Heroes where we take a look at the best mods for individual characters. While I do not claim to have all of the answers in this game, I do my research and have used every character I write about extensively. These are mod recommendations and they are certainly not the only option. However we look to help players maximize their characters in SWGoH and we are always open to feedback if you have a mod setup that works well for your gameplay. 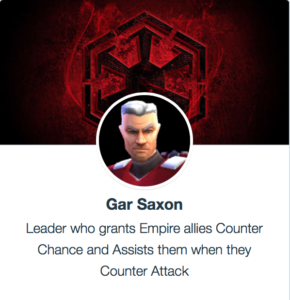 Today’s character to review mods for will be Gar Saxon. The leader of the Super Commandos in Maul’s Shadow Collective and later the Imperial occupation on Mandalore in the Star Wars Rebels series, Saxon plays a rather small roll in the Star Wars story to be included in SWGoH. While his role in the game was minimal from his addition in 2017 through 2020, the 2021 addition of the Mandalorian tag may change things up dramatically. In SWGoH his kit is solid, but it is dependent on counter attacks and assists, so keeping his survivability up will improve his effectiveness. Let’s take a look at the best mods for Gar Saxon below.

Main Focus: Potency is the key area to focus on for Gar Saxon. Saxon’s value comes from his ability to inflict Speed Down and his counter attacks, and since the counter attacks don’t need any Speed, I will go with Potency as the main focus. However, treat Speed as 1b to Potency’s 1a. His basic can inflict Speed Down, and reduce his cooldowns by 1 if the enemy already has Speed Down, and his AoE special is a Turn Meter reducing attack, both of which will benefit from the added Potency.

Additional Areas to Focus: Speed, Offense, Critical Chance, Critical Damage & survivability. Speed is the norm in SWGoH – 95% of all characters need it. I recommend improving Gar Saxon’s rather low 147 base Speed to enhance his kit, but this is not a character where you need +20 Speed secondaries. Offense, CC and CD will all help him hit harder, and with a lot of counter attacks this can prove quite annoying for your enemies. Survivability – defense, health and protection and even tenacity to an extent – is key to keeping him alive, and since counter attacks are important for Gar you want to enhance his survivability as much as possible. With The Armorer now in-game and the Mandalorian tag, adding to Health and Protection specifically will help Gar out a lot if used under her lead. In addition, more Tenacity will help keep Daze away so the counter continue to annoy and help your cause.

Speed Priority: 2/10 – Gar Saxon is not designed to be fast, he is designed to debuff, use his AoE and counter attack. As a result I rank him very low in terms of the need for strong Speed secondary stats.

In-game Mod Recommendations: Offense & Potency. This is a pretty solid recommendation, but the new Mandalorian tag will mean we need more testing to see how best to use Gar Saxon and which mods make the most sense.

The “ideal mod setup” can be interpreted a few different ways. As I mentioned above, Gar Saxon needs to be quite potent but also survive attacks and dish out strong counters, so do all you can to enhance these  areas. Note the plus (Multiplexer) could be a Potency focus if you cannot get enough from secondary stats elsewhere and it may we worthwhile to experiment with an Offense-focused arrow mod. Thus, here is my preferred mod setup for Gar Saxon:

SWGoH: What we may see from the Geonosis Territory Battles