Welcome to the mods guide for the First Order Special Forces TIE Pilot, another article in our series about Star Wars Galaxy of Heroes where we take a look at the best mods for individual characters. While I do not claim to have all of the answers in this game, I do my research and have used every toon I write about extensively. These are mod recommendations based on the character’s kit and actual gameplay to help you in your quest to dominate the Galaxy of Heroes holotables. 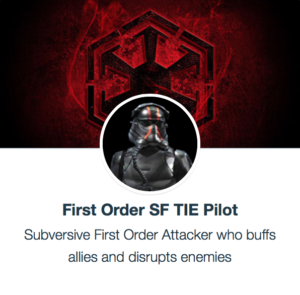 Today’s character to review mods for is the new First Order Special Forces TIE Pilot. Kylo Ren Unmasked and First Order SF TIE Pilot were first announced by Gaming-fans.com & our fellow GameChangers in November 2017 and became available in marquee events shortly thereafter. Now a part of the game for over two years, the value of FOSFTP really took a dive after that initial release. However it was announced in February 2020 that FOSFTP was to be one of the required characters for the first Galactic Legend Event to unlock the new 2020 version of Kylo Ren.

Main Focus: While 95% of the characters in SWGoH need Speed, the First Order SF TIE Pilot fits that norm to a tee. In fact, in testing him at differing Speed levels, I found that he is much more effective at the higher Speed, thus that is the main focus I recommend. Note that while Speed is the main area of focus, I am suggesting the Speed is gained from secondary mod stats and not a Speed set, as the FOSFTP has only a 150 base Speed when maxed out and will not gain as much from four Speed mods as many faster characters.

Additional Areas to Focus: Potency, Critical Chance and Survivability. Potency will help bolster the basic attack, Reciprocation, which can inflict the Defense Down debuff. Survivability in SWGoH is Defense, Health and Protection – boost these to keep characters alive longer. Any additional Offense is good, as this seems to be a weak spot for FOSFTP, and given his kit I suggest a focus on Critical Chance and Critical Damage given his special AoE attack Drumfire inflicts Defense Down on enemies who are critically hit. Also, unlike the original Kylo Ren’s AoE which does not score crits, this attack can gain massive Turn Meter under a Kylo Ren Unmasked leadership. Note also that the KRU leader ability grants all First Order characters +30 Speed and +40% CD, so going with a CC primary on the Holo-Array (Triangle) mod for FOSFTP is a real option.

In-game Mod Recommendations: Critical Damage & Critical Chance. Well as you can see, I have been suggesting this since FOSFTP was first released, but honestly I have never seen the real value in this character. Maybe the new Kylo Ren will cause him to shine or increased Relic levels for First Order Special Forces TIE Pilot, but honestly he is kind of lame at this point in the game and I would not waste my better mods on him.

I am choosing to go with a set of 4 Critical Damage mods and 2 Critical Chance mods to gain as much as possible in these two areas with a major emphasis on Critical Chance and Speed from the secondaries, but some may prefer a Speed set instead of CD. My tests have really left me disappointed in FOSFTP as his offense is nowhere near FOTP at similar gear levels. Basically, if you are relying on his to be a big damage dealer in a First Order team, you will not be happy with the result. Thus here is my preferred mod setup for First Order Special Forces TIE Pilot:

Thanks! There’s been almost no information regarding gameplay for FOSFTP (is that the shortened version the kids are using these days? No one ever mentions him enough to tell.) so this helped me out a great deal, even if it was just a verification of how terrible he is. Lol.

I think he’s a great pair with FOTP, use his third skill set on him and get that stun plus significant extra damage. I tend to use him more as a support than an attacker. Stunning characters plus the use of dumfire to weeken them makes him feel more support than anything else.