One of the stars the of Star Wars Rebels cartoon series, Sabine Wren is the young Mandalorian warrior and artist who specializes in explosives throughout the four seasons of the show. Armed with the Mandalorian artifact called the “Darksaber,” Wren is a very strong character in SWGoH when geared and well-modded with her Phoenix Squadron teammates under a Hera Syndulla lead. 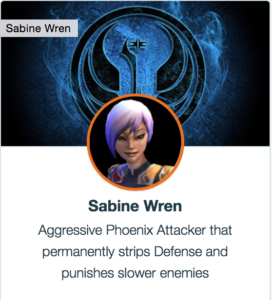 Armed with Zeta Abilities alongside Ezra Bridger and Zeb Orrelios, Wren is a big damage dealer for endgame players.

When Sabine’s Zeta ability was released I was immediately intrigued, and thanks to my QA/dev account as a part of the EA/CG GameChangers program for Star Wars Galaxy of Heroes, I was able to test this Zeta Ability out. My research on this Zeta is detailed below.

Squad Arena: I have tested the Phoenix toons in the Squad Arena extensively, all maxed on all abilities (Zetas included) and all at Gear 12. The three Phoenix Zetas that stand out to me are Sabine Wren’s first, Zeb a close second and Ezra 3rd. What I like about Sabine is that she has the lone AoE in the Phoenix faction to date, but the potential of her Zeta is not always fully realized thanks to taunting characters like General Kenobi and Baze Malbus on META teams in the Squad Arena. As a result, Garazeb Orrelios and Ezra Bridger get the nod as the top Phoenix Zetas for the Squad Arena, but Sabine’s is still valuable.

Rancor: The Rancor Raid is the area where Sabine’s Zeta ability is the least effective, as all of the Phoenix Zetas are for the most part. Her Zeta is on a AoE attack and, other than Phase 1, you are facing a single enemy in the Rancor which takes a lot of the value away. Since none of the Phoenix characters are big on Turn Meter reduction, the key to a solo of the Rancor Raid, this Zeta does not have much impact.

AAT/HAAT: Sabine Wren’s Zeta is not going to have the impact that a Zeta Cody or a Zeta Finn will have in the Tank Takedown Raid, but honestly, there are only a handful of real difference-making Zetas for HAAT. It depends on the Phase you use your Phoenix toons on how effective the Zeta is. Since the tank cannot lose TM in Phases 2 and 4, there is no Stagger benefit there. Honestly, I am not a fan of using the Phoenix characters in HAAT, but Sabine can help you boost your scores a bit for sure.

Territory Battles: Territory Battles is where Sabine’s Zeta really has a chance to shine. In early rounds of battles in Phases 1 and 2 her Demolish AoE can, much like Wedge Antilles’ AoE attack, kill the entire lineup of enemies to advance your squad to the next round. Landing multiple Stagger debuffs to remove TM is an awesome tool as the TB rounds become more difficult and the Expose helps tear through tough enemies like the taunting characters we often see.

How I Use zSabine: My use of zSabine is mostly in Territory Battles and in several battles in the Galactic War – the two places where you see multiple enemies at a time to allow the AoE to work as intended.

My Rating of Sabine Wren’s Zeta Ability: My rating for Sabine’s Zeta is a 6.5. I feel it is above average and better than many, but I would not rank it ahead of Savage Opress who is a 7/10 and can win a Squad Arena battle by himself. While I am trying to reserve a 10/10 for the best of SWGoH, I have yet to find one that is so OP that it deserves a 10. Sabine’s Zeta is nice to have, and I am now considering it for my personal account, but it’s not a must-have.

[…] Expose and Stagger on the target enemy, but you don’t need a ton of Potency if you have a Zeta on Sabine’s AoE. Speed is a focus simply because you must have speed on your characters to be effective, and she is […]