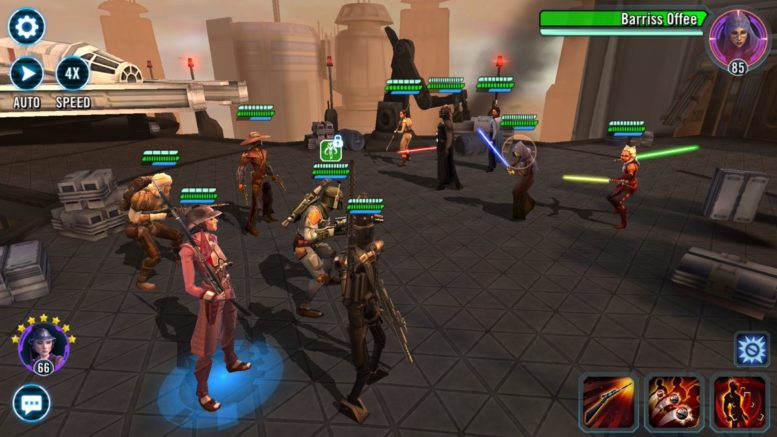 Welcome to the best mods for Zam Wesell, another article in a series about Star Wars Galaxy of Heroes where we take a look at the best mods for each SWGoH character. While I do not claim to have all of the answers in this game, I do my research and have used every character I write about extensively. These are mod recommendations based on the character’s kit and actual gameplay to help you in your quest to dominate the Galaxy of Heroes holotables. 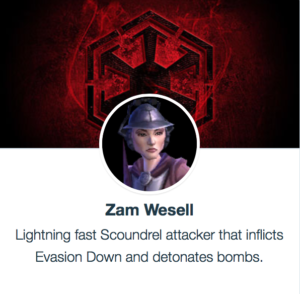 Bounty Hunter Zam Wesell is described by SWGoH as a “lightning fast Scoundrel attacker that inflicts Evasion Down and detonates bombs.” One of the old guard in the Scoundrel and Bounty Hunter factions, Zam Wesell gained value with the introduction of Territory Battles: Imperial Retaliation, but like all things in games of this style, the eventual power creep saw her value dip considerably over time. However, just like the addition of Zeta abilities years ago, the addition of Omicron materials in SWGoH in late 2021 has changed the way we look at several characters, Zam included. Her Shapeshifter unique, with the Omicron, adds “While in Grand Arena: Zam instead gains 60% increases to her Offense, Max Health, and Max Protection. Zam gains 5% Speed for each other Bounty Hunter ally. Bounty Hunter allies gain 20% of Zam’s current Offense, Max Protection, Max Health, and Speed until the first time she is defeated.” Let’s take a look at how this will impact how we mod Zam Wesell in Galaxy of Heroes.

Additional Areas to Focus: Potency, Offense and survivability in the forms of Health & Protection. Zam Wesell has an interesting kit – her offense is landing thermal detonators and being so fast that she annoys her opponents. Adding Potency to her will help you land the thermal detonators with her special See What Sticks as well as the Evasion Down debuff with her Electro-Goggles special. Survivability is also an area to focus on so up her Health and Protection to help her pass 20% of that on to her Bounty Hunter allies with the Omicron. She also recovers 10% Protection when using the Electro-Goggles special for each enemy with a Thermal Detonator, so a focus on Protection is wise. Finally, adding significant offense is a good idea so that her basic hits harder and so that she can pass some of that Offense on to her Bounty Hunter allies, again, with the Omicron and in the GAC game mode.

In-game Mod Recommendations: Speed & Potency. No disagreement here – make her lightning fast and super potent to maximize her effectiveness, but do no neglect Offense, Health & Protection.

Zam Wesell is one of those SWGoH characters who using Speed mods is actually a good strategy since her base Speed is so high. I am suggesting a set of 4 Speed mods and a set of 2 Potency or Health mods – here is my recommended mod setup for the Bounty Hunter Zam Wesell:

SWGoH: Should I Buy the Solo Ultimate Bundle?