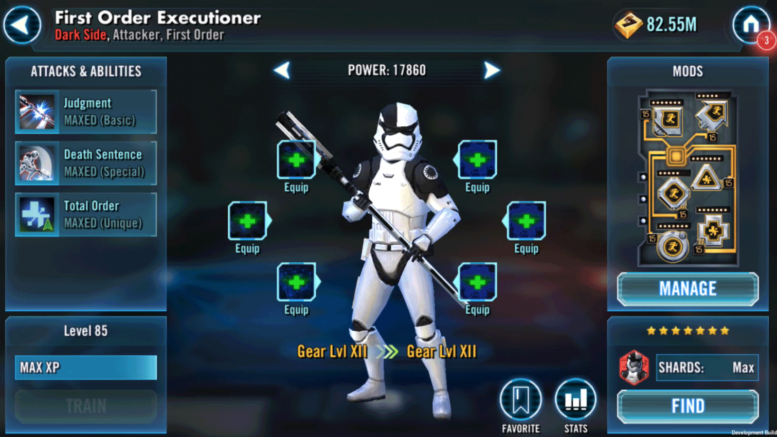 Welcome to the latest article in our series about the popular game Star Wars Galaxy of Heroes where we take a look at the best mods for each SWGoH character. While I do not claim to have all of the answers in this game, I do my research and have used every toon I write about extensively. These are mod recommendations and they are certainly not the only option. However we look to help players maximize their characters in SWGoH and we are always open to feedback if you have a mod setup that works well for your gameplay. 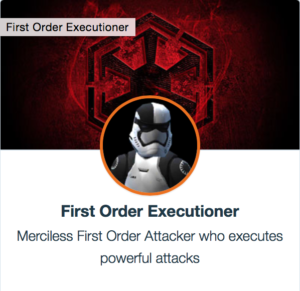 The First Order Executioner, who when first released was made available early to me via EA’s SWGoH GameChangers program, is one of the newer additions to the First Order faction, having the ability to dispel buffs and remove Turn Meter while stacking Health. While he had some time on a Heroic Sith Raid Phase 4 team used after Nihilus is down, with Relics in the game today things have evolved. Let’s take a look at the best mods for the First Order Executioner.

Main Mods Focus: Speed is pretty much always the biggest focus in Star Wars Galaxy of Heroes, and the First Order Executioner is no exception. However his value is going to come in long battles or battles with many waves of fighting (like Territory Battles and Raids) so I’m going with a co-main focus of Critical Chance and Health. Each critical hit from FOE increases his Max Health by 10% (stacking), so a higher Critical Chance and a higher Health number will maximize his abilities. Of course if you are running him in a team led by Kylo Ren Unmasked, he will get a 40% CC and a +30 Speed boost.

Additional Areas to Focus: Speed, Critical Damage, Offense and Potency. Survivability is already covered with Health above, and with a high Critical Chance, raising both his Offense as well as raising his Critical Damage stat will mean his attacks will be even more powerful. First Order Executioner was designed to be used under a Kylo Ren Unmasked lead which gives up to 40% CD as well as +30 Speed, so these areas of focus will be enhanced even more to make FOE more effective. Once you get him to Gear 13 and begin upgrading First Order Executioner’s Relic, you’re going to see a nice Health increase and some very nice offensive gains with Physical Damage, Physical CC, and both Armor and Resistance Penetration. Finally added Potency will help ensure the 50% Turn Meter reduction from his special attack works as you want it to.

In-game Mod Recommendations: Health & Critical Chance. Interesting… Maybe the devs decided to read what I wrote in January 2018 and ensure they got it right. 😉 Either way, this is where you want to be, with solid Speed secondaries, to get the most out of FOE.

I originally tested out 3 sets of Critical Chance mods with high Health and Speed secondaries, but a combination of CC and Health mods will work just as effectively. Note that once you get to Gear 13 and start the Relic upgrades, FOE will gain 18% CC from the Relic and will not need as much from his mods. Thus, here are Best Mods for the First Order Executioner in SWGoH:

While I certainly see your point on going all critical chance sets, I think there’s some value to actually using at least one health set. FOX gains offense equal to 5% of his max health, so a high health number is gonna help him overall. Also, his basic his a guarenteed critical hit if the target is debuffed (which First Order teams can do fairly easily).

CC is actually quite worthless since you keep him fed with advantage which guarantees crit hits. Speed and health secondaries on health and CD sets is best.

I’m curious as to why you’re stacking potency on a character that doesn’t have any debuff abilities.

I don’t understand. Why would you go for critical chance when he’s always with KRU a FOO which give him constant advantages? Go for either speed or health mods with Health / Speed / Critical Damage primaries with focus on health, offense a critical damage.

I have modified the recommendations a bit after seeing your feedback – thanks!