January is about to be behind us, and like every month, the final few days cause the Star Wars Galaxy of Heroes community to speculate like never before. Thanks to the SWGoH GameChangers programs from EA & Capital Games, Gaming-fans.com is pleased to bring the Daily Login Character and the February’s Calendar of SWGoH Events. 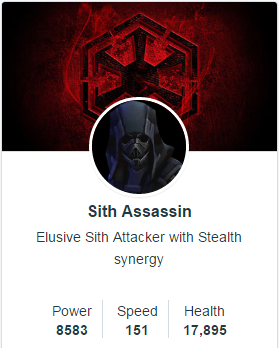 February’s Daily login character, sure to add to speculation and rumors of what is to come, will be the Sith Assassin. First released in April 2017, Sith Assassin is another nod to the Old Republic and is best played with plenty of Speed from her mods. Given the fact that the last few months of login characters have been somehow related to a recent or upcoming update, this will be sure to reignite the (should be) stifled rumors that Darth Revan is coming to SWGoH this month.

The February Calendar of Events for SWGoH will start with the Defense of Dathomir event on February 1 and will feature the Emperor’s Demise event from Feb. 8-14. While nothing is slated for February 14th, wouldn’t a cute love story event with Anakin and Padme be a great addition? Of course, that was a joke (ridiculous rumors begin…). Better yet, what about Finn and Rose? The Galaxy of Heroes community would surely embrace this budding romance! (Also a joke…)

Back to real SWGoH news, four Territory Wars and two Territory Battles, one Light Side and one Dark, are also scheduled. Click the link for the SWGoH Event Calendar for the complete updated schedule for February.

SWGoH: Fleet Changes in Galaxy of Heroes & the Impact on the Game