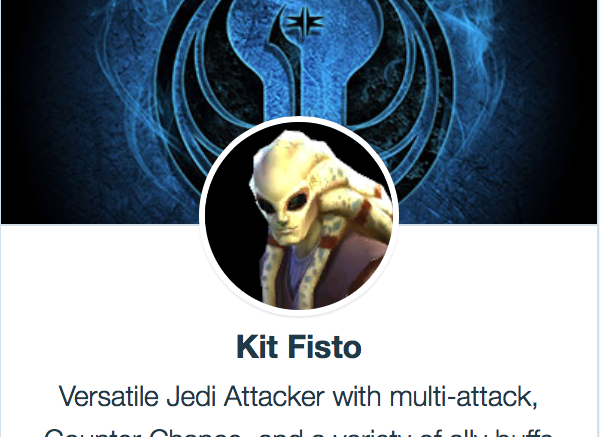 Welcome to another article in a series about Star Wars Galaxy of Heroes where we take a look at the best mods for individual characters. While I do not claim to have all of the answers in this game, I do my research and have used every toon I write about extensively. 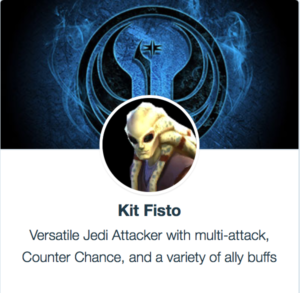 Kit Fisto is attainable mainly through a 10 energy cantina node. This makes him available to pick up and upgrade relatively early as a useful attacker with decent health and armor. Though he has one special ability that grants a potency bonus to his allies, he ultimately offers very minor support even as a leader. Additionally, Kit Fisto has no ability to produce debuffs on enemy characters, so potency must be avoided in every mod for an efficient optimization.

Main Focus: Critical Damage, coupled with Critical Chance at any opportunity, will make sure that Kit Fisto hits as hard as he can every single time, including bonus attacks. Though Lightsaber Mastery only offers a 30% chance to attack again, as a primary ability it cannot be blocked and it is also used for every counter-attack. This also means that beyond stunning him, there is no way to stop Kit Fitso from trying to earn a bonus attack.

Additional Areas to Focus: Critical Chance and Offense should be secondary in order to ensure Kit Fisto has the highest damage per attack possible. There’s no way to increase his chances for dealing bonus attacks, and while it’s possible to upgrade his counter ability with the right leader, it’s not as helpful without a taunt ability. Health, Defense, and Protection are good ways to add to his already decent constitution, but Tenacity will ensure that he can shrug off even stuns and stay useful when it counts. With a starting speed of 120, there’s no way to make him comparable to other fast toons, but any speed will be a boon to him, giving him a chance to attack more often.

Kit Fisto is better suited towards a mod set that makes him attack hard every time. Health and Defense are useful to him, but I would recommend Tenacity as a tertiary focus. As such, this is my ideal mod setup for Kit Fisto: