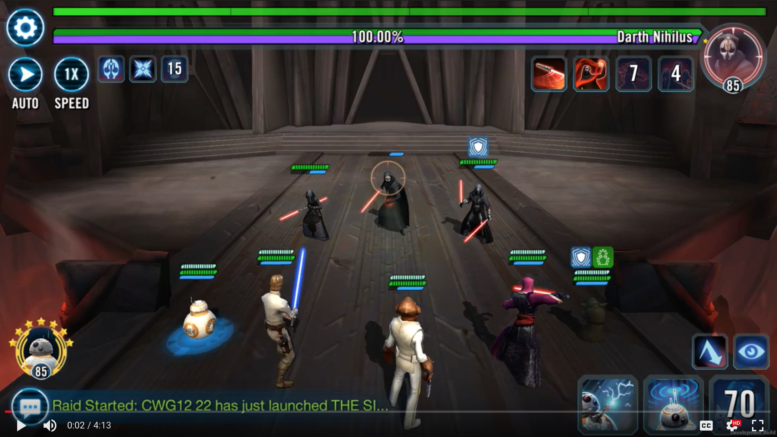 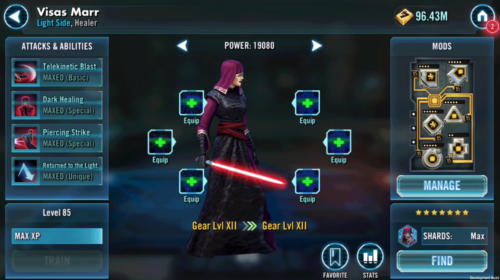 Visas Marr, unveiled to Gaming-fans.com Director of Content LJ and the other SWGoH GameChangers during our trip to the EA Capital Games studio in February 2018, was the former apprentice to Darth Nihilus. Marr’s kit shows her to be anti-Sith and thanks to LJ’s gameplay at the event, we are able to provide some early thoughts on her value in SWGoH. In addition, now that Visas Marr is unlocked and starred up on LJ’s personal and QA/dev accounts we feel that we have the data needed for this guide, however your feedback is welcome in the comments below.

Let’s take a look at our recommendations on the best areas of focus for Visas Marr’s mods.

Main Focus: Speed is always of high value, and while it is important to Visas Marr’s kit, Health is the main area of focus. She can recover 25% of her Max Health when using her basic, Telekinetic Blast, against Sith enemies and she grants 35% of her Max Health to all allies upon using Dark Healing, so raise that Health stat to maximize this special.

Additional Areas to Focus: Speed, Offense, Tenacity & Defense. Speed is very important to making Visas Marr more effective, especially given her base Speed is just 126, but her counter attacks make up for some of this lack of Speed. Offense is an area of focus to make Visas Marr hit harder, and given the fact that she counters Sith frequently, we want to make those hits hurt more. Her unique, Returned to the Light, is quite similar to Rey (Scavenger)‘s unique given debuffs basically weaken her abilities, just as they lessen Rey’s offense. Thus, Tenacity is recommended to keep her counter chance and assist chances high. Finally defense is recommended to keep her alive longer to add to her survivability.

Visas Marr has an kit that is perfectly designed for the new Sith Triumvirate Raid if enhanced properly. For the most effective use of Visas Marr in SWGoH, I recommend two sets of Health mods (4 total) and one set of (2) Tenacity mods based on your available mod inventory.