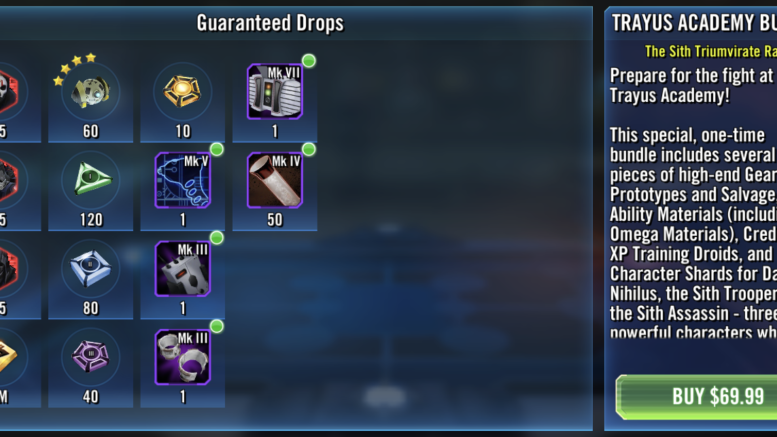 Our SWGoH Should I Buy series continues with a review of the Trayus Academy Bundle.

With the arrival of the Sith Triumvirate Raid comes a way for players to catch up on their farming efforts for some powerful characters that have a variety of use.

The Trayus Academy Bundle is $69.99 USD and offers the following:

The bundle is priced a bit higher than some of the more recent bundles available in the game, but offers a lot of guaranteed and crucial shards and gear.

Darth Nihilus was first available through his Marquee Event in February 2017 and since then, the only place to farm his shards has been through his single node on Dark Side Hard 9A. His node isn’t too difficult to complete, but at only 5 attempts a day (averaging 1-2 shards daily), unlocking Nihilus and taking him 7* can easily become a 6-8 month farm.

Sith Trooper and Sith Assassin were first released in the game at roughly the same time as Nihilus and, while they are available on Cantina Nodes (8B and 8C, respectively), the Stage 8 Cantina nodes are notably difficult and at 16 Cantina Energy per attempt, even farming them through the day’s energy plus 300 extra Cantina Energy daily can make unlocking them and taking them to 7* a 4-6 month farm. Additional, many important characters are farmed solely through Cantina nodes and mods are only farmed through Cantina energy, making the farms for Sith Trooper and Assassin long and specific, with no ability focus elsewhere while trying to get them unlocked and to 7*.

The Trayus Academy Bundle offers the perfect head start for Nihilus, Trooper, and Assassin if these characters are not already unlocked and the bundle can mean the difference between another star if the characters are unlocked. 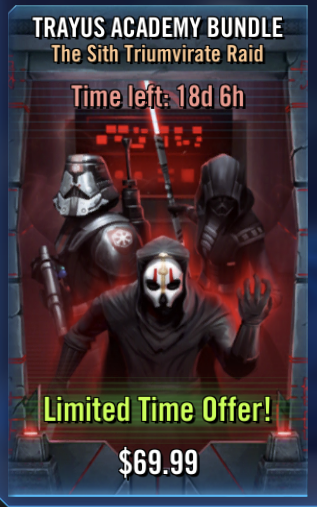 All three characters unlock with 50 shards at 3*, so the bundle allows players to unlock each of them with a few extra shards. All three characters are excellent under a Sith lead and Darth Nihilus is one of the best plug-and-play type characters who can fit into virtually any team. Nihilus is not only a force in the Pit Raid, the AAT Raid, and now the Sith Raid, but his ability kit makes him extremely useful even as low as 3* Gear 9.

The shards offered alone give this bundle a lot of value, but what makes it even more palatable are the additional elements. The bundle comes with 10 Omega mats, 5 full pieces of high-level gear, and 4 million credits.

The individual full pieces of gear are all required to gear characters between Gear Levels 8-11. The individual pieces regularly come at 1400 crystals a piece (about $12 USD) and amount to $60 USD on their own. Aside from that, the 10 Omegas equate to 10 days of completing daily activities, and the 4 million credits require any of the following: 7 days of 12 Galactic War nodes, 2 Credit Heists giving at least 2.5 mil and 1.5 mil, or several weeks of gameplay.

When the full value of the Trayus Academy Bundle is examined, it’s much easier to see the benefits of the one-time bundle with its guaranteed pieces: Three extremely valuable character unlocks, 4 million credits, omegas, and $60 worth of high level gear. The bundle is still priced a bit higher than some of what we’ve seen lately, but the bundle definitely offers a ton of value that can be used both with the latest content and across the full game.

Sith Assassin is farm able via the last slot in Guild shipments, not just Cantina stages.