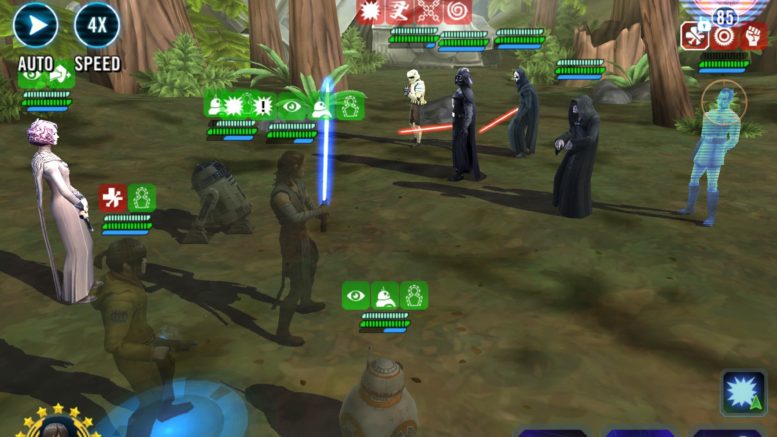 First introduced to Star Wars Galaxy of Heroes in the Pieces & Plans event in 2017, BB-8 began as a nice complementary character to the Resistance faction. At that time the main leader in SWGoH for the Resistance was Finn, enhanced greatly by a Zeta on his leadership, but in December 2017 that all changed. The introduction of Rey (Jedi Training) immediately shifted the META for the small percentage of players who were able to unlock her. Equipped with a complicated and robust kit and the ability to add three Zeta Abilities, RJT, when paired with BB-8 and R2-D2, became the META leader for nearly four months atop the Squad Arena. 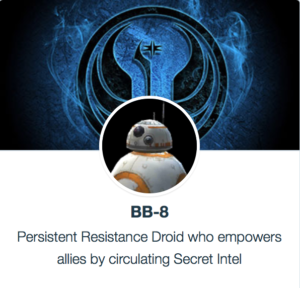 In SWGoH BB-8 has two Zeta abilities – one on each of his two uniques, Roll with the Punches, and Self-Preservation Protocol.

The Roll with the Punches ability Zeta adds “When BB-8 attacks out of turn, he calls a random Resistance ally to Assist.” Basically, if you use RJT’s special attack, Defiant Slash, to call BB-8 to assist her attack you’re actually calling a 3rd attack from a Resistance ally. In addition, if BB-8 counters an enemy’s attack it becomes a double attack with an ally’s assist.

The Self-Preservation Protocol ability Zeta adds “When BB-8 Evades, Droid allies recover 8% Health and 8% Protection.” Given the fact that R2-D2’s Smokescreen grants Foresight to a specific ally, placing the Foresight on BB-8 will in essence heal R2-D2 when BB-8 evades the next attack (unless the enemy can hit through Foresight). This comes in handy in the Sith Triumvirate Raid when survivability is a consistent struggle and anytime BB-8 is used in an all-droid lineup.

Gameplay: The key, in my opinion, to maximized results with BB-8 is using him in an all-Resistance squad under a Rey (Jedi Training) lead (for those who have RJT), or under a Zeta Finn lead. BB-8 is the perfect complement to RJT and a near perfect one to Zeta Finn. His Covert Data Transfer special adds the Secret Intel unique buff raises Potency which can help under both leaders since the Expose debuff is so valuable for turn meter manipulation, and Covert Data Transfer grants RJT turn meter making their pairing even more important. When R2-D2 is added, the ability to give BB-8 Foresight to nearly force an evaded attack then heals R2 thanks to the Self-Preservation Protocol ability Zeta making these three nearly inseparable.

Squad Arena: Using BB-8 under a Rey (Jedi Training) lead on my Squad Arena team continues, even with Zeta Palpatine teams all around, to keep me in the hunt for #1 at payout each night. Since her release in December, to mid-March 2017, RJT teams with well-modded teammates and strategically used Zeta abilities can continue to be competitive in the Squad Arena. Personally, I prefer the three Resistance toons alongside General Kenobi and Grand Admiral Thrawn, but several others fit nicely with this trio.

AAT/HAAT: The Tank Takedown Raid‘s Heroic version, aka HAAT, now has a variety of teams that can solo or nearly solo specific phase. While that is not really my focus – ever – Resistance-heavy teams with Rey (Jedi Training) leading the group seem to be the way to go here. Even with the Expose nerf of March 2018, RJT Resistance teams can put up several million in damage when powered up correctly.

Sith Triumvirate Raid: The Sith Triumvirate Raid, aka STR, when initially released, cause many high GP guilds to move players who did not have RJT and BB-8 in favor of those who did to be able to beat the Heroic STR because of RJT & BB-8’s high value. While the Expose Nerf of 2018 changes things along with the second round of Rey (Jedi Training) and third for BB-8, it will be interesting to see if some of those Heroic Sith Triumvirate Raid guilds need to take a step back or not.

Territory Battles: Much like Zeta Finn, having a Zeta RJT team with BB-8 on it, with the right mods and a couple of Zetas abilities, can nearly ensure you a perfect or near perfect run in the Light Side Territory Battles, aka Rebel Assault. Like above, RJT with R2-D2 and BB-8 are the keys, and a Zeta on BB-8’s Roll with the Punches ability is critical to the success of the team for the extra attacks and resulting TM from added Expose debuffs.

Territory Wars: One of the perks of having a Rey (Jedi Training) team is the ability to take down Zeta Barriss Offee teams. A common strategy is to put highly defensive teams with General Kenobi and zBarriss in a specific territory to create a “wall” of sorts. I have used RJT on defense in Territory Wars in the past, but prefer to keep her for offense to take down one of the META teams like the combo above, or a zCLS or zPalpatine lead squad.

My Rating of zBB-8: My rating for Zeta BB-8 is a 9/10 for his Roll with the Punches ability, and a 6.5/10 for his Self-Preservation Protocol ability. I debated the value of both many times in my head and continued to see more and more value in the Roll with the Punches ability. The added attacks, and chances to land more Expose debuffs resulting in added Turn Meter, really makes this team efficient and powerful, even with the recent Expose Nerf. While Self-Preservation Protocol ability is not nearly as valuable, it is a very nice ability to have in place for survivability on the RJT team and I never balk at investing into abilities on characters that I use extensively. While I have yet to find a 10/10-rated Zeta ability to date, BB-8’s Zetas are a very good investment in my opinion.