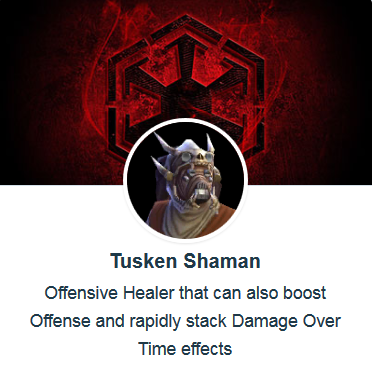 Welcome to the latest article in our series about the popular game Star Wars Galaxy of Heroes where we take a look at the best mods for SWGoH characters. While we do not claim to have all of the answers in this game, we do our own research and have used every toon we write about extensively. 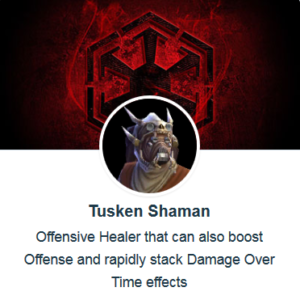 The Tuskens aren’t generally known as long-standing fan favorites within the Star Wars galaxy and yet, there are three Tuskens available in the game. Interestingly enough, EA Capital Games added them before they became more widely respected and liked in the Star Wars universe. With The Mandalorian and The Book of Boba Fett allowing us to see more about the lives of the Tuskens, or the “sand people,” the developers of CG have made it clear that they do not intend to add to this faction with the recent addition of a GAC 3v3 Omicron for Tusken Raider.

Today we’ll be taking a look at the mods for Tusken Shaman. He is described as an “offensive healer” but like his Tusken faction buddies, the game has evolved a lot since he was even slightly relevant in Phase 2 of the Heroic AAT back in 2018. Let’s look at what mods and stats you want to emphasize to ensure the Tusken Shaman is as effective as possible in SWGoH.

Main focus: Health. Tusken Shaman is a healer who provides Offense Up and heals his teammates, but if you look at how his kit works, he heals based on the use of his special, Rite of Savagery, and his unique Master Storyteller. From that unique he heals his allies for 10% of their Max Health when any unit is defeated and grants all Tusken allies 25% Turn Meter. As a result, he does not need to take frequent turns to heal, so added Health should be a main focus for Tusken Shaman.

Secondary Focus: Speed, Potency, additional survivability. Speed is still important to Tusken Shaman, but with the addition of the Omicron to the Tusken Raider you can expect more kills in each battle now. The Tusken Raider’s omicron ability reads “While in 3v3 Grand Arenas and all allies are Tusken at the state of battle: Gain Taunt for 1 turn at the start of each enemy’s turn. If Tusken Raider is defeated while another ally is active, they revive at 100% Health. All allies gain 15% Critical Chanceand Critical Damage and 3 Speed for each living ally, and whenever an ally is defeated, reduce the cool downs of all allies by 1 and dispel all debuffs on them. At the start of the encounter, summon a Tusken Raider.” As a result, I expect we will see the Tusken Raider killed off a lot, causing the heal effect from Tusken Shaman to the living Tuskens and stacking Speed, CC and CD to them as well, and a building difficulty for the opponent. Other areas to focus on are Potency to help him land Damage Over Time (DoT) debuffs and additional survivability. Given his importance for healing, additional Protection, Defense and even Tenacity will be helpful, but focus on Health and Speed above all other stats.

In-game Mod Recommendations: Speed & Potency. I see where the devs are pointing players with these recommendation, but I am leaving toward more Health with Speed and less of an emphasis on Potency. The Tusken Shaman is not going to do a lot offensively and keeping him alive to allow for success in GAC 3v3 battles is where this Omicron has value, not in landing an extra DoTs.

I recommend utilizing Speed and Health mod sets on Tusken Shaman, with high Speed, Health and Potency secondaries. Four Health mods and two Potency mods are an option is you have very high Speed secondaries, otherwise a Speed set may be more appropriate. Here is my recommendation for the best mod approach for Tusken Shaman: