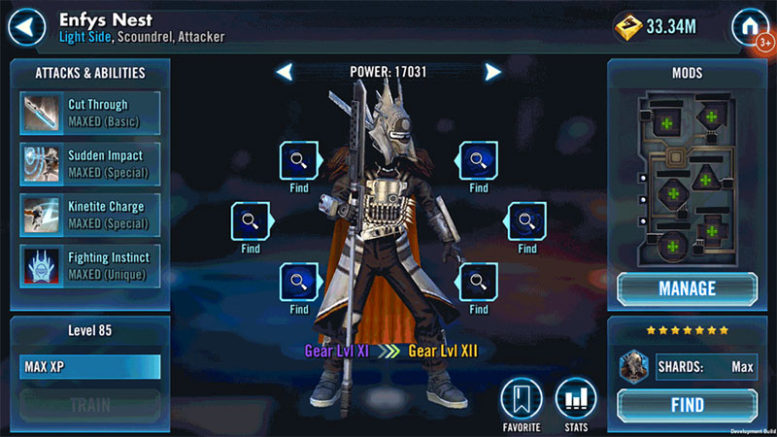 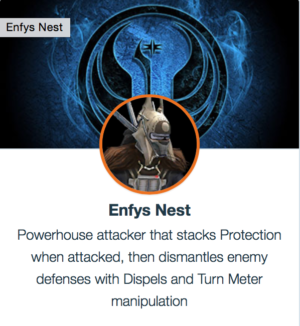 Today’s toon to review mods for is from Solo: A Star Wars Story and was for a time the hottest (in SWGoH) of the new characters added immediately after the premier of the movie – Enfys Nest. Nest is described in-game as a “Powerhouse attacker that stacks Protection when attacked, then dismantles enemy defenses with Dispels and Turn Meter manipulation.” If I did not know better, I would think this kit belongs on a legendary toon, not a role player from one of the Star Wars Story movies. Unless of course there is more to come about the story of Enfys Nest from Lucasfilm… Let’s take a look at the best mods for Enfys Nest.

Main Focus: Enfys’ unique, Fighting Instinct, grants her 30% critical chance, and Bonus Protection equal to 40% of her health, both of which stack each time she is attacked, and last until she takes a turn. This, combined with stacking offensive bonuses throughout the battle, makes Health the most important stat for Enfys Nest. She becomes extremely hard to kill, steadily increases her damage output, and has an 80% counter chance, and this is enhanced even more at Gear 13 when you review the Relic upgrade for Enfys Nest. This makes her deadly to the point of being able to take on teams in 5 v 1 or 5 v 2 battles. However, as the characters and the game have evolved, the use of high Tenacity stats has proven to be wise. Because the Daze debuff can mess up all of your plans, going with a tanky, high-Health and Tenacity Enfys Nest is highly effective in the Grand Arena and Territory Wars PVP game modes.

Additional Areas to Focus: In addition to Health and Tenacity mentioned above, Potency and Speed are also key stats to understand with Enfys Nest. If you want to make use of the powerful debuffs in her toolkit, which include Expose, Stun, Buff Immunity, and even an AoE Daze, Potency is a must. Speed has differing results for Enfys Nest. It is encouraged in a Asajj Ventress lead Nightsisters team with Nest as the 5th member, but discouraged in Grand Arena or Territory War counters to Bastila Jedi or Ewok teams. But Speed is for the most part discouraged when you want her to sit back and absorb hits and counter to defeat your enemies.

In-game Mod Recommendations: Speed & Potency. I will not be overly critical of these recommendations from CG given the way the community has learned to use Enfys Nest since she was first added to the game. Speed and Potency can make for an effective character, but I prefer the high Tenacity Nest given the versatility this gives you in the GA and TW.

I recommend the use of a set of four Tenacity and two Health mods on Enfys Nest to maximize her survivability and use on your roster. I have often used Nest under a Qi’ra lead alone to take out Jedi Bastila and Ewok teams, as well as others, and this allows for Enfys Nest to be a true beat in SWGoH. Overall, this is the mod setup I recommend for Enfys Nest:

I Know she needs as much Protection she can get,but won’t she be low on potency without potency cross?

I just updated the article and addressed this topic – thanks for the comment!

I think her stacking protection is based on health stat as opposed to protection.

It is indeed! All bonus protection is based off the characters health.

I thought that there was an article, which clearly showed that the Protection gain of 40% is based strictly on health – indeed, that this is the case for all toons in the game. If that is true, then why would a Health Primary not be the right mod?

I’m not sure what article you’re referring to, but the mechanics behind bonus protection seem to have slipped LJ’s mind. The article has now been re-written to reflect this.

Bonus protection is always always always based on HP not protection. It’s confusing, I know but that’s how Wampa and Traya are based off of also. You can check swgoh.gg or watch nukin’s video on how to MOD her if you wanna verify.