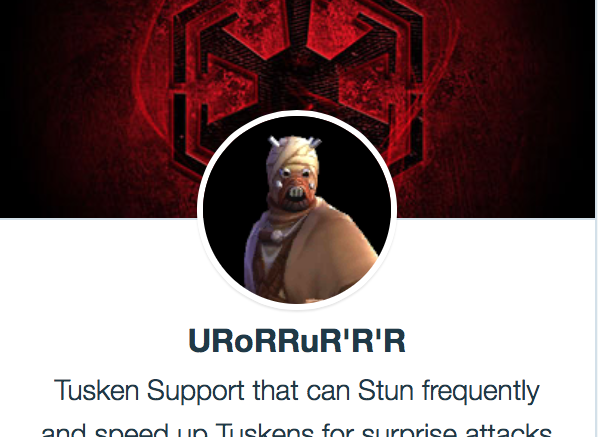 Welcome to the best mods for URoRRuR’R’R, the latest article in our series about the popular game Star Wars Galaxy of Heroes where we take a look at the best mods SWGoH characters. While I do not claim to have all of the answers in this game, I do my research and have used every character I write about extensively. 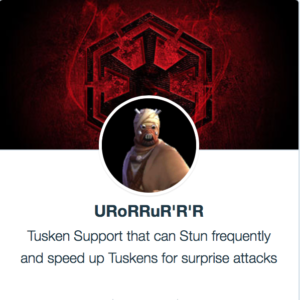 Today’s character to review mods for will be the Tusken leader URoRRuR’R’R. The lone Tusken character with a leadership ability when this was first published in 2018, for this April 2022 update he remains the lone Tusken leader. URoRRuR’R’R has a kit geared around Stunning his enemies and gaining Offense Up and his leadership grants his Tusken allies a significant defense boost. Until the addition of a Grand Arena 3v3 based Omicron upgrade for Tusken Raider, URoRRuR’R’R and his pals had little to no place in the game for end-game players and was widely considered one of the bottom 10 characters in SWGoH. We will see if this Omicron changes that or not.

Main Focus: Speed. Testing the Tuskens out on my personal account my GameChangers dev/QA account in 2018 showed that the Tuskens were basically worthless without strong Speed stats. If there is one Tusken character who is a candidate for Speed mods, or at least higher Speed secondaries, URoRRuR’R’R is the one. With a base Speed of 167, he’s more than 10% higher than all other Tuskens and the best of the three to go hard at the Speed stat.

Additional Areas to Focus: Potency, Offense and survivability. URoRRuR’R’R has a basic that has a 60% chance to Stun his target, so adding Potency is going to make this more effective. His unique, Ambush Instincts, grants him Offense Up for 4 turns whenever an enemy is Stunned, so if you start off with a high Offense stat that boost will really make him hit hard. URoRRuR’R’R’s leader ability, Tusken Chief, grants Tusken allies 55 Defense and other allies half that amount, so going with Defense as a focus seems logical, but do not ignore Health as there is a synergy with Tusken Shaman that causes the Shaman’s heals to be based on the individual Tusken character’s Max Health.

In-game Mod Recommendations: Speed & Health. No real disagreement here, but I could see where Potency or Defense is chose over Health as that is where I am leaning.

The “ideal mod setup” can be interpreted a few different ways. If you target Speed, Potency, Offense and survivability through the mods this could work out well a number of different ways. Here is my preferred mod setup for URoRRuR’R’R:

Well they are about to change mods in-game. Are you saying that you do not like a strategy and fan site helping advise about the game?