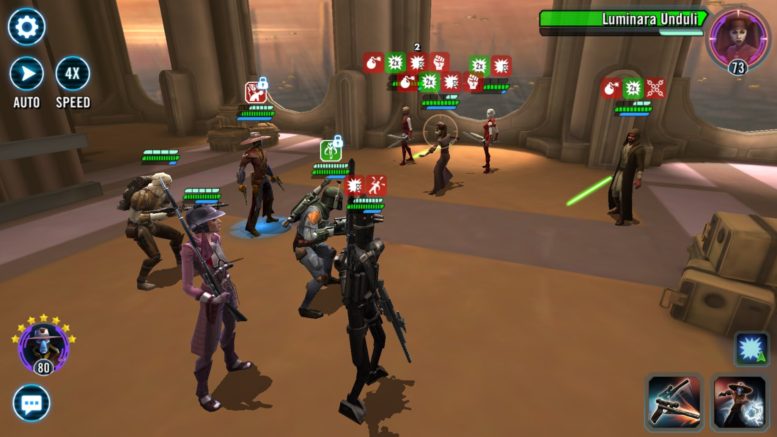 As part of the SWGoH GameChangers program, Gaming-fans.com is pleased to announce that Clone Wars era Bounty Hunter Cad Bane is set for a rework in Star Wars Galaxy of Heroes. A Duros male Bounty Hunter, Cad Bane specialized in fighting Jedi and was seen as the leading Bounty Hunter in the galaxy after the death of Jango Fett.

Let’s take a look at his newly revised kit and some thoughts on it below.

Special 1: STUN GUN (Cooldown 3)
FINAL TEXT: Deal Physical damage to target enemy, dispel all buffs on them and Stun them for 1 turn. In addition, remove 50% Turn Meter, doubled against Jedi enemies. If the target is debuffed, remove 25% of their Max Protection (stacking). This attack can’t be Evaded.

Thoughts on the Cad Bane Rework

While I am happy to see Cad Bane get a rework only time will tell how good these changes will make him. Bane was my first 7-star character back in the days when I did not know what I was doing in SWGoH, long before there were GameChangers and YouTubers to help us along. While I abandoned any investment into Cad Bane from about Gear 7 until the Dark Side Territory Battles were released, I do believe that the Payout and resulting +25% Evasion will be interesting and quite helpful – similar to the Imperial TIE Fighter in the Ships mode. The new Unique will make him less squishy and he should hit harder, but I cannot help thinking this rework simply made a bad character average. Again, time will tell.

SWGoH: A Closer Look at the Aurra Sing Bounty Hunter team for Phase 3 of the Sith Triumvirate Raid