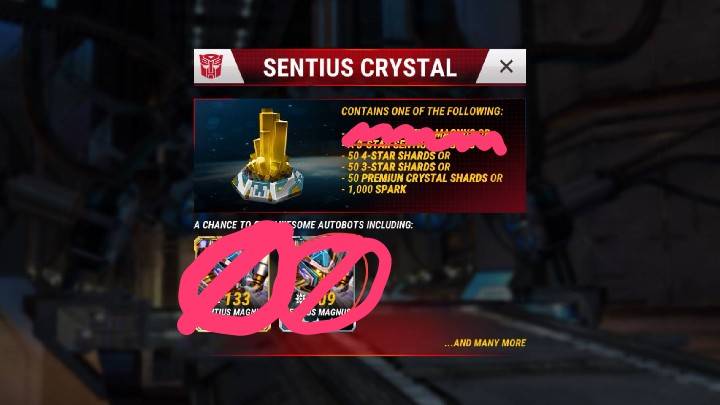 While the higher ups at Space Ape are likely smiling this morning after a “successful” weekend event, the community is certainly not sharing in the joy. After a much hyped introduction of two new Transformers – Sentius Magnus and Sentius Malus – the TFEW weekend event Equilibrium proved to have drop rates that really took a lot of the fun out of the game for many players. Sentius Magnus and Sentius Malus were intended to be very difficult bots to attain, similar to the Gnaw event which saw many players fight the event multiple times before finally opening a 3-star or 4-star Gnaw, but the attitude after this event is different. In my own personal experience my Alliance ranked 56th with over 1.1 million points and I personally contributed over 38k while spending enough money this weekend on this game to have me feeling sick to my stomach. From the 120 crystals I opened, I did not open a 3-star or 4-star bot. 1Drew, a teammate of mine has also gone 0 for 120 despite over 37k points.

Meanwhile, outside of my own personal experience, the community’s attitude continues to be one of massive frustration.

A player known as “Frustrated VIP” on the TFEW Discord server added the following:

Just lost a maxed HQ 16 heavy hitter. Left the game due to known reasons. Probably more will follow if this game doesn’t improve the rewards and gameplay. Awaiting the “once in a lifetime” experience.

I just don’t quite get what the incentive to spend on an event anything like that ever again. Several I know just thumbed their nose at the event and got the guy. Whereas so many busted ass and got nothing…I mean, the XP was good too, but that really doesn’t cut it when I open 140 dud crystals.

120 crystals and no bot. Nomore lb for me ever again 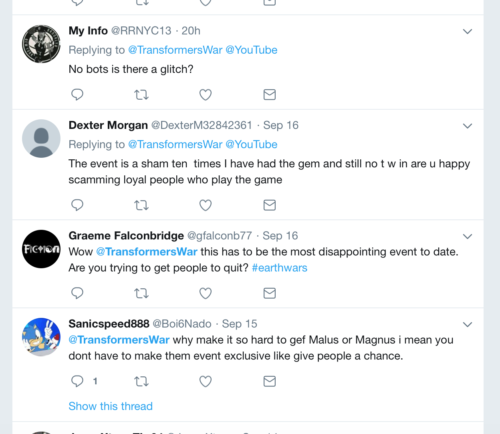 To try to add more context and increase the sample size, we went to Twitter to see if the sentiment on the Sentius twins event was different. While yes, one player had opened a 4-star Sentius Magnus and posted the screenshot in the TFEW account’s @ mentions, we found more of the same from the vast majority of the players. More comments on this can be seen to the right.

While the vast majority of the comments I have read on Discord, Twitter and Line are negative, I will say that within my own Alliance the team has been much more positive after scoring a Alliance-best number and ranking well once again.

So what does this all mean for Transformers Earth Wars, one of the games we here at Gaming-fans.com love and play religiously? It’s unclear now, while emotions are raw from the players. I can tell you that I plan to go back to FTP (Free To Play) after breaking that trend and spending in the past week for the first time after 9-10 months FTP. While I am a VIP, the excitement of this kind of event was the reason I opened my wallet, and the results of this event have certainly impacted my future decisions. Will the community do the same? Will they follow through on the Discord and Twitter comments? Only time will tell, but let’s hope Transformers Earth Wars has new and exciting updates in store to keep things rolling on an otherwise enjoyable game.

Note: I offered to publish any official response to @TransformersWar on Twitter and will keep the community posted if that response does indeed come.

Hi, I’m Daryl, officer of the Win Distructors. I wanted to report a problem / error. In this LB event on over 300 open crystals of our glorious alliance only 1 from 4 * and 2 from 3 *. a very low percentage. never happened before such a thing. In respect of the Players and those who buy your cell packages we ask for a refund equal to how many open event crystals with the right percentages and the possibility to take the bot as it is right. I take this opportunity to offer you our greetings. By Daryl

Hi, spaceape has treated the people whom are paying them their wages badly. Some time back, I bought the G1 bundle and received 4 ultra magnus 4* dups. None have me ultra magnus g1 core. When I wrote in to enquire if there is a glitch, the immediate reply was “it is the gamer’s choice to spend”. I was infuriated and blasted at the responder. There was an apology and in short, besides the low drop rate for the 4* bot, the bot’s specific core will require another drop rate too. This is utter crap. Then sentius event came and in my alliance of 80pax (we have 2 teams) total of around 4000 crystals, only 2×4* and 3×3*. Total crap. One spender quit right away. Other games have better rewards for loyalty to the game while this one is headed by heartless people looking to exploit the transformers fans, many of whom are working adults and can afford to spend. We, the spenders are taken for granted and treated like suckers.