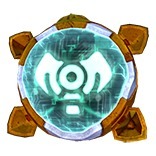 Starting at Level 1 it reads “Restores 0.5% health to all nearby teammates every 5 seconds,” with the starts at health stat increasing based on the level of the Prime Core.

So who are the best bots for the Micronus Prime Core? A bot with Micronus attached heals nearby teammates on offense and defense (bots in outposts), including the attached bot and any nearby minions. The health received is based off of the health of the bots in range (area of exposure) of the bot with Micronus attached. The higher the level of Micronus, the greater health percentage the nearby bots will receive every five seconds. As an example, in the picture below, Astrotrain has Micronus attached. Megatron receives 520 health while Hook receives 277 health as the Micronus healing percentage is based upon the health capacity of the receiving bot which is dictated by bot level (1 through 60) and/if the received bot has a Vitality core attached (Vitality increases the health of the attached bot by percentage). 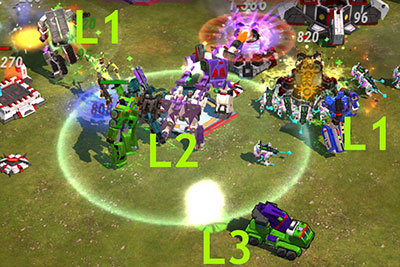 As a primer, bots have basic attack characteristics based upon range. The attack ranges are melee (Level 1; generically tanks and some specials), short (level 2; generically aerials and some specials/triple changers), medium (Level 2; specials Galvatron/Ultra Magnus) and long (Level 3; gunners). In the screenshot above, Astrotrain has Micronus attached. Astrotrain has a short attack range (level 2) and stands in the center of the team, healing all (level 1, 2 and 3). If Micronus is attached to a melee (level 1) or long (level 3) range bot, the healing effects of Micronus might not reach all given their proximity (based upon basic attack range and pathing) to the rest of the team.

The usefulness and placement of Micronus can be dependent on the attacking strategy. With backdoor strategies, Micronus attached to Astrotrain/Springer is viewed as optimal as they support Dead End/Kup near the HQ. For walk strategies, if the desire is to heal the entire team, selecting a bot that has a short or medium (level 2) range, such as Astrotrain/Springer, Galvatron/Ultra Magnus and Nemesis Prime/Hot Rod, is optimal. Many players attach Micronus to Megatron/Optimus Prime (level 1) as their special ability commands the team to attack a specific target and therefore come in closer proximity to the healing effects of Micronus. It is also common to see Micronus attached to Soundwave/Blaster (level 1) as Micronus will heal their minions including on defense in outposts. Other players attach Micronus to healers. However, attaching Micronus to healers can be problematic given they heal the bot with the lowest health which may or may not be in proximity of other friendly bots.

There are some short or medium (level 2) range bots that may be sub optimal for Micronus placement such as Bombshell/Perceptor, Skrapnel/Bumblebee and Scavenger/Rust Dust. These bots are some of the fastest in the game and can quickly wander off and be well out of range for Micronus healing effects to be beneficial to the overall squad. Other short or medium (level 2) range bots like Dead End/Kup or Cutthroat/Tracks may be undesirable for Micronus as well due to common player usage or lack of overall health.

There are arguably no invalid placements of Micronus or any Power Core, just varying levels of effectiveness based upon the core’s attributes, bot specific characteristics and strategy. However, the Best Bots for Micronus Prime Core, in my opinion, are Soundwave/Blaster, Astrotrain/Springer, Megatron/Optimus Prime, Galvatron/Ultra Magnus.

TFEW: Weekend Events Rakes in the Cash for Space Ape, Angers the Community