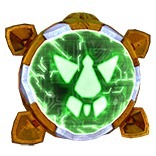 Starting at Level 1 it reads “After using their ability, nearby outpost bots are hacked for _ seconds. You cannot be hacked.” with the length of time (seconds) increasing upon each level up.

The selection of which bot to attach Liege Maximo is dependent on the attack strategy and team composition. On many walk teams, Liege Maximo is attached to bots with high health that have the ability to rush such as Barricade/Drift, Tantrum/Hotspot and Head Strong/Jumpstream. These bots can rush in, intentionally springing outposts, absorb the Special Ability damage saving the rest of the squad from outpost harm. On Deathsaurus/Star Saber sacrifice strategies, Liege is sometimes used to compromise the outposts after Deathsaurus/Star Saber die in order to soften the defense further. In other alternate walk strategies, Liege Maximo is attached to Soundwave/Blaster in order to perform a minion outpost pull. This strategy is useful to bring the outposts to the squad rather than the squad popping the outpost based upon bot pathing. This allows the attacking squad to meet the outpost on their terms versus the design of the base. Ultimately, outside of sacrifice strategies, you want this Prime Core on a bot who can absorb the ability damage. This therefore limits the bot selection to high health bots, which typically are frontline warriors or melee range.

You will sometimes see Liege Maximo attached to Dead End/Kup on backdoor strategies, but be careful as after the outpost bots are hacked, Dead End/Kup will sometimes break off their attack and follow the outposts away from the intended target. On defense, Liege Maximo prevents the attached outpost bot from being hacked, however this is not overly effective and typically not used.