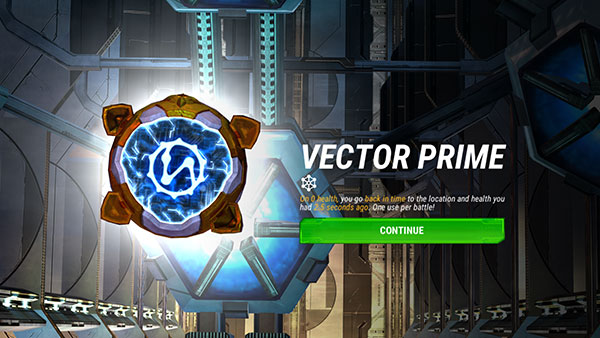 Starting at Level 1 it reads “On 0 health, you go back in time to the location and health you had 2.5 seconds ago. One use per battle!”

So who are the best bots for the Vector Prime Core? Characters who rush into the defense to wreak havoc and destroy or disable the defensive units seem to be the best fit, basically your suicide bots. Star Saber/Deathsaurus, Kup/Dead End, Elita-1/Lugnut, Drift/Barricade, Cheetor/Blackarachnia and Snarl/Hun Gurrr seem to be good fits as well as Grimlock, Optimus Primal and Streetwise. Star Saber & Deathsaurus have the Blazing Storm special to rush in and disable the defensive units, thus upon being defeated you can keep the bot attacking thanks to the time warp.

Rae of Primes Gone Wild, author of the spreadsheet graphic that is commonly seen on Discord and Line, gives the Vector Prime Core a “C” grade, the second lowest grade for all 12 Prime Cores with only the Nexus Prime Core lower. This Prime Core needs to be leveled up significantly to be effective, so good luck prioritizing how to balance your resources.