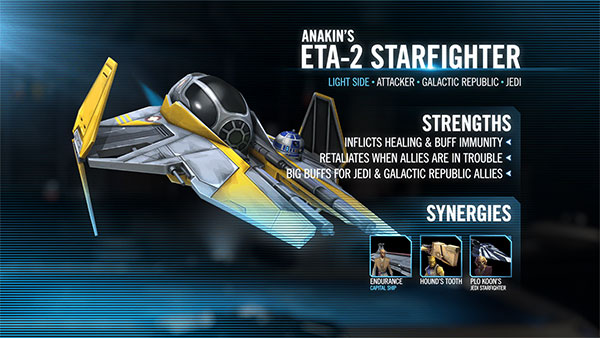 News dropped this evening in Star Wars Galaxy of Heroes that will add another ship to the game and feature some temporary changes to Territory Wars. Anakin’s Eta-2 Starfighter is set to join the game in a few hours which fits the rumored and expected updates to many Clone Wars-era elements of SWGoH. In addition, during the month of November there will be limited time bonuses in Territory Wars for General Grievous and Mace Windu and two mystery characters, one Galactic Republic and one Separatist, will receive bonuses that players will only learn of when they enter the next Territory War.

Here is a look at the Windu and Grievous TW Bonuses:

Battle-Attuned Master of the Force – Mace Windu has +100% Max Health, +480% Max Protection, +100% Counter Chance, and is immune to Shock, Daze and Stun. Additionally, when attacking Sith with his basic attack Mace deals +1000% damage, and Inflict Expose on all enemies for 2 turns whenever he takes damage. If Jango Fett has Expose, Mace Windu’s attacks will instantly defeat him (Damage Immunity does not prevent this effect).

General of the Droid Army – General Grievous has +300% Offense. At the start of each turn, if Grievous is below 100% Health, he dispels all debuffs on himself and grants Taunt to the other healthiest Droid ally until the end of the turn. When a Droid ally is defeated for the first time in battle, Grievous dispels all debuffs on himself, resets all ability cooldowns, and gains 3 bonus turns.

In addition to the above, Aurra Sing has become farmable on Cantina node 7-C and the Hound’s Tooth (Bossk’s ship) is now farmable on Light Side Hard 8-D.

Also, despite being purely cosmetic, all Clone Troopers will have their helmets on during the month of November.