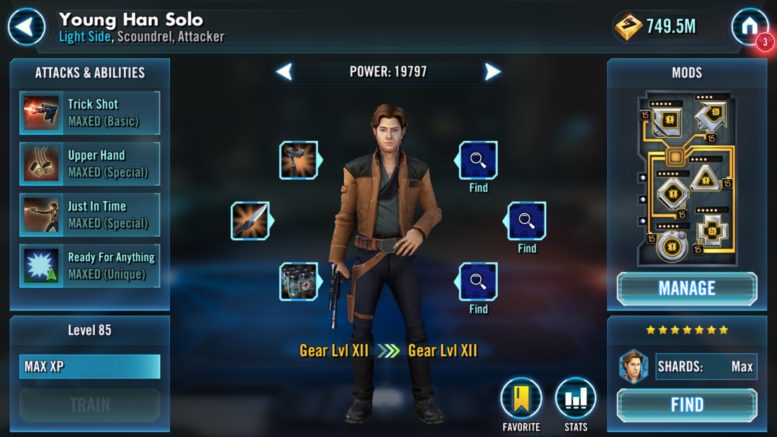 Some important information was published on the EA Star Wars Galaxy of Heroes forums this evening regarding Gear XII and Territory Wars bonuses for April. To start, this post informed the community that the April Territory Wars bonuses will be the 5 versions of Han Solo and Droids and NOT the Geonosians and Clones that typically get the TW bonus love. Here is a look at the published ability boosts:

And for the Droids:

In addition, Geonosian ships are also getting a Territory War bonus which reads “Whenever an ally uses an ability during their turn, all other Geonosians that gained a buff this turn assist, dealing 200% more damage (max 1 assist per ally per turn).”

Meanwhile, another post stated that Gear XII salvage will be farmable on Light Side and Dark Side Battles Stage 9 in the upcoming update and that both Rebel Officer Leia Organa and Imperial Probe Droid will return to 1 shard per Special Mission completed as opposed to the 2 shards we have been receiving for several months.

So what does all of this mean? Well if you read the latest The (Probably) Road Ahead from Grand Admiral Sledge here at Gaming-fans.com, you can read what he says about more Clone Wars content, new Territory Battles maps and more.