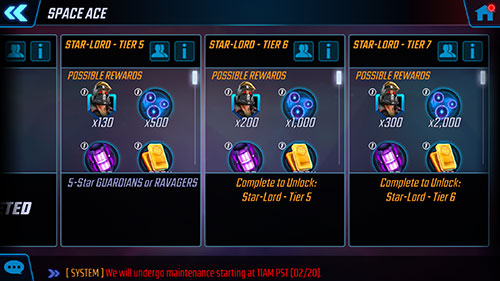 Opening Legendary characters is always important for competitive players and fans alike in Marvel Strike Force, and upgrading them after the initial addition to your roster is equally as important. For me, Star Lord began as a nice-to-have character that quickly became essential after watching one of Mobile Gamer’s MSF videos on his OhEmGee channel. A team of Star Lord, Rocket and Minn-erva alongside Thanos and either Groot or Vision quickly made the rounds as a must-have for Raid success and in many other areas of the game. Now, with Star Lord at gear Tier 11 and a major part of my roster, his 5-stars continue to hold me back, especially in the Dark Dimension battles where 6 and 7-star characters are required.

When the Space Ace Legendary event returns on Tuesday evening in the USA, below I will list my team used to try to upgrade Star Lord. I am hopeful that this will help players looking to unlock and upgrade Star Lord on their rosters in Marvel Strike Force.

The Space Ace event requires a combination of 5 Guardian & Ravager characters to unlock Star Lord, who opens at 5-stars (310 shards).

Tier 6: With my team at the level listed I made short work of the 7 enemies.

Tier 7: I am expecting this to be a real challenge. Thanos, Ultimus and a group of Kree greet me for the fight which appears to have 12 base enemies. I take out Korath first and then try to hit Kree Oracle next, but a Thanos taunt disrupts my plans. The offensive firepower of my team plows through Thanos thanks to the kill shot from Yondu’s AoE. A few hits later Gamora goes on a tear taking our the Kree Oracle, then Kree Noble. More Kree join the party and I lose Yondu after he calls two Ravager Boomers to join in the fun. I have 4 of my original 5 and the two extra Boomers against Ultimus and 4 Kree minions and this is looking good. With Ultimus in the red I go after the big dog and take him out, paving the way for the victory. Just a few more hits and a 7-star Star-Lord is mine!