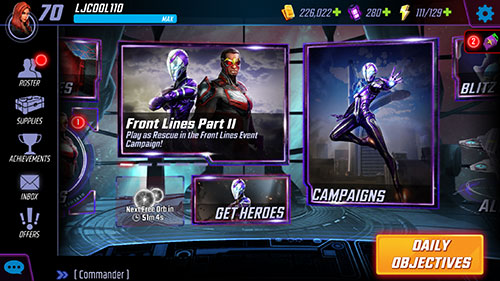 Welcome to the latest article in our series of character reviews about the popular game Marvel Strike Force where we break down the kits to tell you how best to use Rescue and all of the other Heroes & Villains in MSF. While we do not claim to have all of the answers in this game, we do our research and have used every character we write about extensively while also giving you a little background on their story. These are reviews based on the character’s kit and actual gameplay to help you in your quest to dominate the Marvel Strike Force. 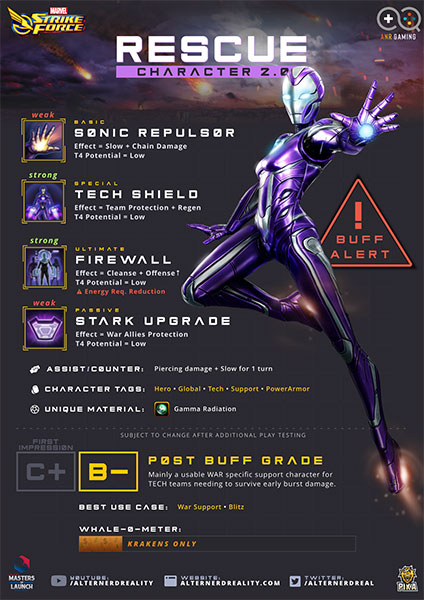 Virginia “Pepper” Potts, first seen in Tales of suspense #45 (September 1963), was originally hired by Stark after fixing an accounting error he had made and went on to take a place in a love triangle between herself, Stark and Happy Hogan. Eventually leaving Stark Industries to begin a family with Happy in Cleveland, Pepper disappears from the main Iron Man storyline until she is captured by Obadiah Stane and eventually re-joins Tony at Stark Solutions. Later becoming Stark’s personal secretary, Pepper is caught in a terrorist explosion and sustains remarkable similar injuries to Tony himself and he in turn places a magnet into her chest to stop the shrapnel from killing her, again just like he had. The difference between his arc reactor and hers was that Peppers was not weaponized and instead relied on electromagnetic technology from Rand Industries which cured her tinnitus and sense electromagnetic fields.

Tony eventually gave Pepper her own suit, Mark 1616 which Pepper herself names “Rescue” armed with repulsor technology as well as portable electromagnetic super field generators not only giving Pepper flight and additional strength, but the ability to manipulate magnetic fields to a great extent all guided by the J.A.R.V.I.S. artificial intelligence.

Rescue: An armoured hero who protects allies with her barrier and enhances Power Armour allies’ attacks, does indeed do what it says on the tin, however her performance for many has been slightly underwhelming, with especially low armour for a character with the power armour tag. She is the pioneer character to utilize the new “barrier” mechanic and has extra uses in Alliance Wars. Her traits are:

A good set of tags especially for the Tech faction to sustain on Tech-specific lanes in Raids. Her Abilities are:

As previously mentioned, Rescue utilizes the new barrier mechanic to a mixed effect. She synergises the best with the other three Power Armour characters, Iron Man, War Machine and Falcon, however the only currently “farmable” character is Iron Man through his Legendary event and even then, Iron Man is painfully due a rework to compliment Rescue and the power armour team. From what I have played, Rescue has no “Link up” attacks such as Iron Man/Captain America, Rocket Raccoon/Groot or Scarlet Witch/Vision, so I could definitely see one coming with Iron Man, possibly something akin to Magneto’s control of character positions. This would then also improve the effectiveness of War Machine’s Missile Systems for close grouping. I currently have Rescue with the Power Armour team headed by Captain America for his synergy with Iron Man and the ability energy that can be granted across the team, making for very good AoE damage across the team, complimented by the Barrier given by Rescue.

Other players have suggested Vision as a good replacement for Cap, or indeed Crossbones, both of which have more AoE damage as well as Vision’s Hero, Global, Tech and Avenger, and Crossbones Global and Tech tags. Arguably Crossbones should also be given the Power Armour tag as it isn’t limited to Stark’s creations as Falcon’s armour was made by the military. Three of the four abilities Rescue possesses get extra bonuses when used in war, making her ideal on defence, better than her being used once, however she is still rather underwhelming with regards to her power as her Barriers seem to be quickly negated by damage and her lack of armour makes little sense. As the power armour team is currently almost completely unfarmable it does put Rescue on a bit of a low this close past her release but I have high hopes that an improvement along with an Iron Man rework and a fifth Power Armour character could greatly improve the use and popularity of the team for all game modes.

Be the first to comment on "MSF Character Review: Rescue"