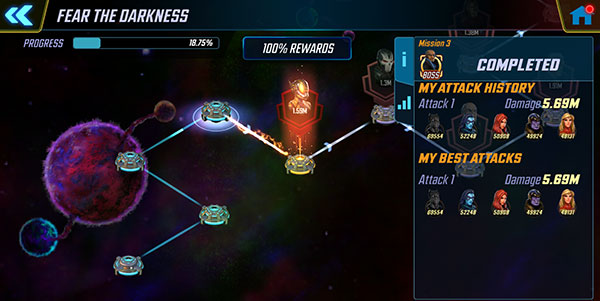 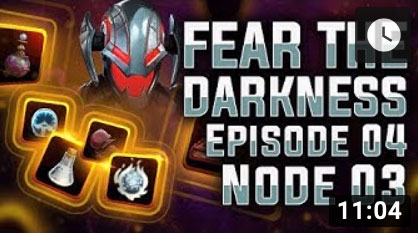 Also be sure to check out the video linked in the graphic below from Marvel Strike Force Envoy YouTuber Khasino as he reviews Fear The Darkness Battle 3 as well. Note that Khasino’s content is Rated PG-13 (language).

06.22.19 – This battle was one I have been eager to fight since I started the Fear The Darkness battles a few days ago. The main boss is Nick Fury, one of the most annoying characters to face in all of Marvel Strike Force, along with several of his SHIELD buddies. However I did notice that not a single SHIELD Medic or SHIELD Security officer were against me as I battled. Unfortunately I fought this late at night and did not have the computer available at the time, so all of my notes are based on my recollection of the battle.

Nick Fury, a single SHIELD Operative, a SHIELD Trooper and multiple SHIELD Assault characters are what I remember from the battle. I was able to stun Fury right away and then hit one of the Assaults a few times before the SHIELD Operative granted stealth, then I put 100% of my effort into killing Nick Fury, which worked out well. From there I took out the Operative and then focused on the SHIELD Trooper, since he is the most annoying offensive character to worry about. Once the reinforcements came to help, I remember another Operative and I believe another couple of Trooper and Assault enemies, and I focused my attacks on first the Operative, then the Trooper before finishing the enemies off.

Day 1, Battle 1 (1 total): Phoenix, Black Widow, Black Panther, Vision and Nick Fury (287k) – Using the same team that just finished off Mission #2, this is the only team I have available today as my “top” team got killed off battling the last mission. This team was not ideal but was able to survive until 7 of 13 enemies remained, which should make tomorrow’s battle much easier.

Day 2, Battle 2 (2 total): Captain Marvel, Star-Lord, Thanos, Minn-Erva and Jessica Jones (260k) – Using the same team that finished off Mission #1 yesterday, I continued the Star-Lord/Thanos ability energy spam strategy as it proves to be quite effective. I faced 6 enemies, and with no stun or ability block available, the biggest challenge was balancing hits on the last 3 enemies – a SHIELD Operative, Assault and Trooper.