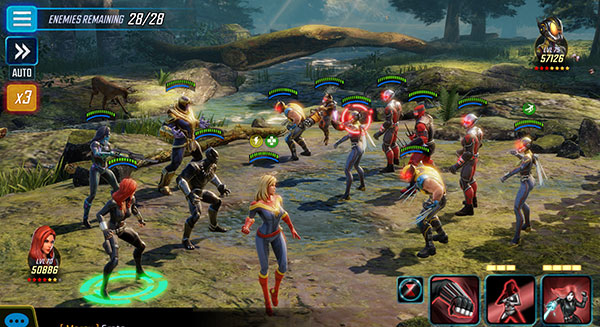 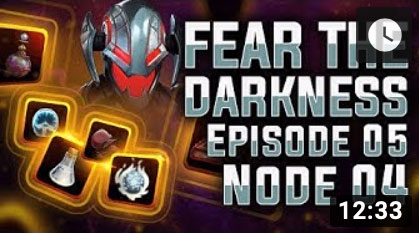 Also be sure to check out the video linked in the graphic below from Marvel Strike Force Envoy YouTuber Khasino as he reviews Fear The Darkness Battle 4 as well. Note that Khasino’s content is Rated PG-13 (language).

06.22.19 – 28 enemies to beat is the task in front of me and the first time I faced Battle #4 it was a feeling out process. Since then I have added Nick Fury (details above) to my team, and while replacing Black Panther will be a loss in power, I think the use of Fury will benefit the synergy of the team a bit and help with survivability of my team. I was able to remove the HAND Sentry which was a big win for the first battle and get Rocket to yellow health.

06.23.19 – 27 of 28 enemies remain, and Rocket will be my first target to remove to eliminate his offense. The addition of Fury is already a fantastic one for survivability and the addition of the reinforcement SHIELD characters.

I stunned Rocket to start and then took him out a few hits later. The two Ant-Mans are my next targets because his ability to copy buffs and land debuffs makes this character a pain in the butt. I find the first Ant-Man to be more challenging to kill than the second, then turn my focus to both Wasps, leaving the two Wolverines. Before I can kill the second Wasp reinforcements arrive in Ant-Man, Thor, Rocket Raccoon and two Luke Cages. Now 23 of 28 enemies remain with 8 on the screen. With the new enemies on the board, Rocket and Ant-Man are now the two I will target. While I focus on Rocket with all of my attacks, my team takes many hits and Minn-erva is in the red. I am able to take out Ant-Man and Wasp but lose Thanos in the process. Luckily, I land a heal from ME and my four alive are back to full health with 20 of 28 enemies remaining. I am able to take out Thor and it’s time to recap.

19 of 28 enemies remain with two Luke Cages and two Wolverines. I focus on the the Luke Cages and stun a Wolverine to  slow their offense, and the team is looking good. After both Luke Cages are down, a group of reinforcements arrive adding a HAND Sentry, two Rocket Raccoons, Ant-Man, Wasp and Star-Lord. This is going to be tough… I begin focusing on HS given the stealth junk that he does, and Black Widow lands a stun on him, but all of my attacks only get him to about 55% health. Both Rockets land AoE attacks that kill Thanos, who I bring back with ME almost immediately, but my five are all either yellow or red health now. Thanos is dead again before another Rocket AoE kills everyone but Fury, then Nick Fury has no support and I am done for today.

06.23.19 – Going with the same five as yesterday – no Black Panther. 17 of 28 enemies remain as I start the battle, 7 of the 8 enemies on-screen have green health, one (HAND Sentry) has yellow health and will get my offensive focus. I am able to heal the team with Minn-erva a few attacks in which kills off HS and puts one Rocket in the yellow, so that is where I will focus now. Black Widow’s stuns are an amazing tool to have available as I stun the weaker Rocket and kill him off but take a crit-filled AoE from the other Rocket Raccoon. I lose Thanos and Black Widow, but ME revives Thanos just before I lose Nick Fury. Now with all characters in the red (ME, Thanos and Captain Marvel) I land a heal from ME which makes this battle change a bit, but I am still outnumbered with a 3 vs 5 on the screen and 14 enemies (total) remaining. I am focusing on Star-Lord who, along with Wasp, are red on health. ME revives Black Widow, then CM kills off Star-Lord and I have my sites on Ant-Man next. A Thanos AoE kills off Wasp and I have Ant-Man and the two Wolverines remaining. As you can see I have no respect for Wolverine in this game (for now). Ant-Man dies and in come a new Ant-Man, another Wolverine (3 on the screen now), Thor, Wasp and Rocket Raccoon (again), the latter of which will get my offensive focus. While Nick Fury is still dead I have a decent 4 vs 7 match-up which I am hoping I can continue to survive and possibly finish this off today. I take a round from the bad guys and land CM’s big hit on Rocket and revive Fury to make it 5 v 7 as another heal from ME bring Fury and Thanos close to full health which was much-needed. A stun of Rocks from BW delays his AoE, but he gets me the next time around. Luckily Fury’s Defense Up is on so it is not as bad. A few hits later Rocket is dead, and it is time to recap.

10 of 28 enemies remain with 6 on-screen – 3 Wolverines, all near full health. Thor at about 80%, Ant-Man about the same and Wasp around 70%. I am going to focus attacks on Ant-Man and Thor to remove the annoyance and offense they have to try and see the finish line today. Thanos dies again and is instantly revived by Minn-erva, easily one of the top characters in Marvel Strike Force IMO, and my team takes several more hits to get most of the team to 50% health or so, but ME’s heal once again is a shot in the arm. Ant-Man goes down and the focus is not on Wasp and Thor, and it only takes a few hits to finish off both. Now three Wolverines remain on-screen and 7 of 28 remain in total, so I will use basics on one specific Wolverine as I await the reinforcements. After two rounds of attacks it appears I have to get this down to two Wolverines before the reinforcements appear, so this is taking a while but I will be at nearly full strength and no cooldowns on almost every ability when they do arrive. I kill off one Wolverine and one attack later in come HAND Sentry, Ant-Man, Wasp and another stinking Wolverine.

6 of 28 enemies remaining with HAND Sentry, Ant-Man, Wasp and three Wolverines to kill for the win. HS will of course be my main focus with Ant-Man and Wasp directly after. A stun from BW and a special attack from CM are followed by Fury reinforcements as I tee off on the HS in an attempt to keep the stealth business from happening. After a ton of attacks both ways I finish off HS with my five nearly at full health and a SHIELD Operative helping out. I stun Ant-Man and begin chipping away at his health and the three bleeds above Ant-Man’s head finally do him in. Now Wasp in my crosshairs, I have just 4 enemies remaining and a SHIELD Operative assisting my 5 as this battle is looking good. While Wasp dodges all too many attacks, I am able to take her out leaving me a 6 vs 3 advantage. At this point I spam them with basic attacks only mixing in specials from Nick Fury to add more allies, Black Wido to speed things up and stun and ME if any healing is needed. I finish off the 4th battle of Fear The Darkness with all 5 at full health and all attacks available to start off Battle #5 strong.

My reward is 200k gold and 2k Mega Orb Fragments.

Day 1, Battle 1 (1 total): Captain Marvel, Star-Lord, Thanos, Minn-Erva and Jessica Jones (260k) – Using the same team that finished off Mission #1 yesterday, I continued the Star-Lord/Thanos ability energy spam strategy and will do so whenever I have this team available. You need to defeat 28 total enemies and I went after Rocket Raccoon first this time as he came out of Hand Sentry’s stealth early both times. I land the blind debuff on him and others when I use Star-Lord’s special to spam energy, but eventually their lineup is too strong. I finally fall with 25 of 28 enemies remaining and Wasp in red health, so a nice improvement from the first time around.

Day 1, Battle 2 (2 total): Vision, Phoenix, Black Panther, Nick Fury and Black Widow (288k) – I left my newest Gear 13 out in Quake as I liked how this team’s offense can make significant dents in tough opponents. I fought through the enemies and lost Vision when 19 of 28 remained, making sure to focus on Rocket as soon as he came as a reinforcement. When I got them down to 17 enemies a new wave of reinforcements arrived and messed me up as the Hand Sentry’s stealth was the big blow given I was distracted in attacking the newest Rocket. This proved to be my undoing as I lost without defeating another enemy.

Day 2, Battle 1 (3 total): Captain Marvel, Star-Lord, Thanos, Minn-Erva and Jessica Jones (260k) – This is my go-to team on anything in FTD and the ability energy spamming is just fun. Rocket and Hand Sentry are the first areas of focus, and when I started this one the challenge was all at the beginning. I took out one of the two Rockets and had to survive two of Hand Sentry’s stealth bombs, then eventually made it through. The Ant-Man & Wasp combos are annoying, but I found that taking out Ant-Man first is best given he passes stolen buffs on to Wasp from his basic, so eliminating him means fewer advantages for that pair. Another Rocket will come near the last quarter of the battle and a Hand Sentry arrives at the end as part of the last group of reinforcements, but overall this was a smooth attempt with a win at the end.