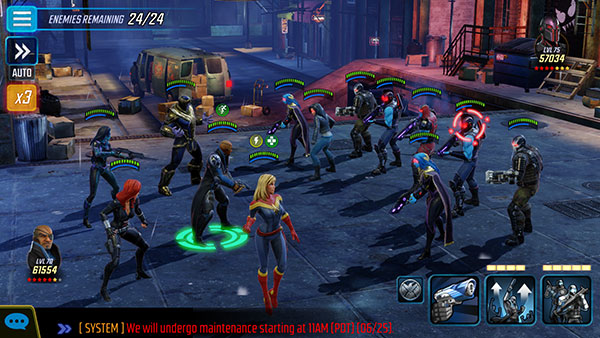 Fear The Darkness is the ultimate endgame content in Marvel Strike Force, and I began fighting node #1 a few days ago. While I admitted before that this team (below) may not be an ideal team makeup for this game mode, I am going to live blog my daily attempts as I look to defeat the Dark Dimension and open Ultron. 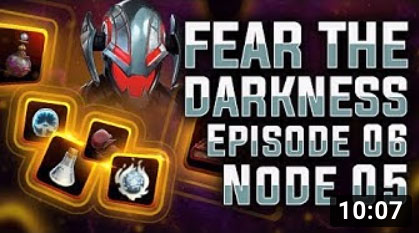 Also be sure to check out the video linked in the graphic below from Marvel Strike Force Envoy YouTuber Khasino as he reviews Fear The Darkness Battle 5 as well. Note that Khasino’s content is Rated PG-13 (language).

06.24.19 – Going with the same five as yesterday – no Black Panther. 24 enemies comprise Battle #5, so here we go. The battle begins with 8 enemies on-screen: 2 Crossbones, Korath, 2 Kree Cyborgs, 2 Kree Nobles and Jessica Jones. I focus my offensive efforts on Korath, but use Fury’s SHIELD reinforcements to try and slow the Crossbones down. I lose Fury early and revive him just before killing Korath, then I revive him and lose Thanos. Of course killing enemies is how you gain the energy to reduce cooldowns and heal, and with just one kill on my record it’s taking a while to get to Minn-erva’s revive, but I finally get Thanos back with 7 enemies still on the board. Black Widow dies just before I kill one Crossbones leaving 6 enemies on the screen and 22 of 24 total. I am focusing my offensive efforts on Jessica Jones and Crossbones, but have a 3 vs 6 currently which is quite tough. I lose ME and at this point just want to weaken the remaining enemies to setup tomorrow.

06.25.19 – Again, the same five as yesterday – no Black Panther. 22 of 24 enemies remain, and 5 of the 6 on-screen are yellow health and 1 is red health. Hoping the Thanos/Minn-erva/Captain Marvel cosmic combo can take advantage… I quickly take out the red health Jessica Jones and now focus on Crossbones, as I need his explosive behavior out of here. Luckily I am able to do that and now have 4 Kree remaining on the screen – 2 Cyborgs and 2 Nobles. I will focus on removing the offense first, so the Kree Cyborgs are the target. Just as I tap that though, Mordo, 2 Kree Reapers and a Kree Oracle join the fun. The Kree Oracle now becomes my focus as I need him out of here before these guys all heal back up… I am able to land a stun and in the process from AoE attacks both Kree Cyborgs die just before I finish off the Oracle. But now another Jessica Jones and two Winter Soldiers appear to make things difficult. Now 17 of 24 enemies remain with 8 on the screen. Mordo is now the target after AoEs again kill off Kree minions and another stun from BW is landed on him. Fury’s reinforcements have half my team in stealth mode and the healing is fantastic despite Mordo and two Winter Soldier enemies – things are going well (for now). I am able to finish off Mordo, but two more Kree Cyborgs and a Korath join in.

14 of 24 enemies remain and my entire team is full health except for Thanos with 4 SHIELD minions assisting me currently. 8 enemies are on the screen and my focus is Winter Soldier since he can hit fairly hard and land heal block. I take out one Winter Soldier and almost screw the whole thing up as ME takes several hits and is in the red, but a Thanos taunt may help… While I lose Thanos, the speed bar/turn meter gain gets ME a turn and she heals the team back to full health which is well-timed. The other Winter Soldier is down and I have 12 enemies remaining and 6 on the screen. I stun Korath but JJ cleanses the debuff immediately and I am focusing on the two Kree Reapers due to their special ability’s chance at landing heal block, the one solid counter to Minn-erva. Captain Marvel take a few hits and is dead but Minn-erva is up and revives Thanos. I stun Korath but the enemies suddenly have an urge to hit ME again as I work on the other Kree Reaper. Another well-timed heal from ME saves the day. I take out Korath and a Crossbones, Winter Soldier and Kree Cyborg appear.

Now 9 of 24 enemies remain with 6 on-screen – JJ, 3 Kree Cyborgs, Winter Soldier and Crossbones. My 5 are all alive and I have 2 SHIELD minions helping out. I survive a blast from Crossbones and now I am working on him to ensure I do not have to see another. I finish off Crossbones several hits later and JJ is a few hits from dead, so I take her out as well. The final 3 new enemies join the fun – Mordo, Kree Oracle and another Kree Cyborg. I have one Cyborg in the red, so my focus will be to kill him and make this a 5 vs 5 ASAP. After a few hits I accomplish my goal and shift my focus to Mordo while using my BW stun on Kree Oracle to prevent added healing. Another stun available after several hits and I stun Mordo this time as I look ti finish him off. I do so leaving 4 enemies with 3 in green health and Winter Soldier with yellow, so I take him out after several hits. Now with 3 Kree minions remaining it is just about picking them off one by one and healing and protecting cooldowns for the next battle. The final 15 or so hits are all basics and the win is mine.

My reward is 200k gold and 8k Gold Orb Fragments.

Day 1, Battle 1 (1 total): Captain Marvel, Star-Lord, Thanos, Minn-Erva and Jessica Jones (260k) – Using my go-to FTD team to spam ability energy, the key is to keep Minn-erva alive through the big hits from Korath and the two Crossbones. After I take those three out I have all on-screen in red or yellow health and as soon as I kill off Jessica Jones reinforcements appear, and annoying reinforcements at that. The Kree Oracle alone can ruin the efforts I have already made to weaken the other Kree minions, and I can’t stand facing Mordo. I went Kree Oracle first, then Mordo and followed with the weaker minions to maximize my effectiveness. Throughout, I always took out the Crossbones enemies as soon as possible and in the end, my strategy proved successful as I cleared the board with relative ease.