Fear The Darkness is the ultimate endgame content in Marvel Strike Force, and I began fighting node over a week ago with each board taking 2-3 days to complete for the most part. While I admitted before that this team (below) may not be an ideal team makeup for this game mode, I am going to live blog my daily attempts as I look to defeat the Dark Dimension and open Ultron. 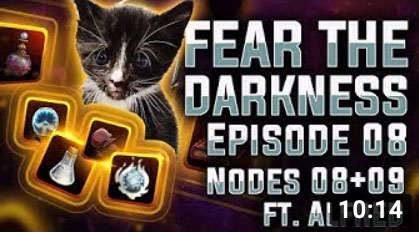 Also be sure to check out the video linked in the graphic below from Marvel Strike Force Envoy YouTuber Khasino as he reviews Fear The Darkness Battles 8 and 9 in the video linked. Note that Khasino’s content is Rated PG-13 (language).

06.28.19 – After it took a single battle to clear Mission 6 and then Mission 7 yesterday, I did not have the time to start Battle #8 last night as well because of the Phoenix Rising live blog of the event. While my schedule slows my progress down, the live blog is something I am dedicated to doing each time to help the community.

I am using the same 5 that continue to get it done each time – no Black Panther again. I am up against 8 enemies of 23 total with 2 Captain Americas, 2 Gamoras, a Groot, Yondu, Rocket Raccoon and Iron Man. Since Rocket is the one character here that frightens me I will do all I can to hit him, but an early taunt from Groot is already causing trouble. I get Rocket to yellow health and stun him before the two CAs start to taunt. I lose Thanos, revive him, and then lose him again and have taken a lot of hits without a single kill (other than Yondu’s minions). Now I have lost Fury and my girls are in trouble. Rocket is in the red and I’d like to eliminate him before I die, but Groot has taunt and I am not sure that I can survive this one. Yondu calls his minons, Minn-erva is down and I get blasted off the map – battle over.

06.29.19 – All of the original 8 bad guys are on the screen and all in green health (most around 60%) except for Rocket just a hit or two away from dead. Apparently I was right; two hits killed him. We trade a bunch of hits and after one Captain America taunts I do some decent damage, so I decide to focus on removing him. After another round of attacks and Captain Marvel’s ultimate I have all enemies except for Groot below 50% health and the one Cap in the red. I take out one Cap and need Minn-erva’s AoE heal to place bleed on my enemies who have been slowly weakened by the AoE attacks, and a Gamora goes down unexpectedly. Another Gamora and Yondu are down and 2 new Gamoras and a Ravager Stitcher join the party. Finally the second Captain America is down leaving only Groot from the first wave and 16 of 23 overall. I kill off both Gamoras next, weakening both and the RS before the reinforcements arrive before Yondu, another RS, Captain America and Iron Man arrive. The new group does a number on my team taking out Captain Marvel, who ME then revives, and I decide to stop allowing the RS to linger and annoy me so I take the original one out. Now focusing on Yondu, I decide that Gamora is a better target to remove since Yondu’s minions can fuel my cooldowns and healing. After taking out a minion and Gamora my team is in great shape, but reinforcements arrive.

Now 11 of 23 enemies remain with 8 on the screen. The 7 in green health are Iron Man, 2 Captain Americas, 2 Rocket Raccoons, 2 Ravager Stitchers and the one in red is Yondu. I stun one Rocket and try to take out Yondu, and after I finally succeed one Rocket Raccoon is getting all of the attention I can give it. After trading several hits, including two Rocket AoE attacks, 5 of the 7 enemies are in yellow health and my teams is all around 50% health. I finally lose Thanos and my entire team is yellow or red, before ME revives the Mad Titan but I lose Black Widow. Now Captain Marvel’s ultimate is up and I need a kill of Rocket here to have a chance or surviving much longer… One Rocket is dead but the other hits me with a powerful AoE putting my 4 remaining in red health, but Minn-erva comes through in the clutch with a heal that boosts my team. A Gamora, Yondu and Iron Man arrive to help the bad guys as I have a 4 vs 8 on the screen to finish the battle off. I revive Black Widow and kill off the final Captain America leaving a Rocket and Iron Man in the red and in my crosshairs. A few hits later both are dead and my team is healed a bit as I look to finish this board tonight. I defeat a RS and focus on the other RS given he is in the red as well. I stun Yondu and take out the final RS leaving Yondu, Gamora and Iron Man in front of me. After killing off two of Yondu’s Ravager minions, I am focusing on Gamora and it only takes a few more hits to remove her. Now Iron Man, then Yondu will be picked off slowly before I get the win. My reward for winning is 200k gold and 2k Mega Orb Fragments.

Day 1, Battle 1 (1 total): Phoenix, Quake, Black Panther, Nick Fury and Black Widow (296k) – I tried this with my go-to team (below) and finally decided to try to start this off in a different order. This proved to be a much better result than my standard order as the team below was struggling to get anywhere around the taunts of Groot, but this team severely weakened all 8 on the screen to setup the battle below.

Day 1, Battle 2 (1 total): Captain Marvel, Star-Lord, Thanos, Minn-Erva and Jessica Jones (260k) – Starting with Rocket in the red, both Gamoras and a Captain America with yellow health and the others all under 70% health, I took out Rocket immediately and while I lost Thanos rather early, I was able to weather the storm and start the ability energy spam train making sure to put the blind debuffs on their attackers. When I go to 11 of 21 enemies remaining two Rockets came in as reinforcements, but I was able to kill one of them off very quickly. Note that I kept the Yondus alive on purpose, which is a bit like playing with fire given his offense, but given he calls minions which are easy to kill (and get energy from killing) this proved to work out in my favor. I was able to get the final four down to Iron Man, Ravager Stitcher, Yondu and Gamora and pciked them off one by one with ease to setup another battle, if time allows, later today.