Fear The Darkness is the ultimate endgame content in Marvel Strike Force, and I began fighting about a month ago with almost every board taking 1-3 days to complete for the most part. While I admitted before that this team (below) may not be an ideal team makeup for this game mode, I am going to live blog my daily attempts as I look to defeat the Dark Dimension and open Ultron. 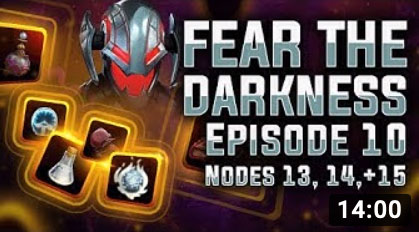 Also be sure to check out the video linked in the graphic below from Marvel Strike Force Envoy YouTuber Khasino as he reviews Fear The Darkness Battles 15 in the video linked. Note that Khasino’s content is Rated PG-13 (language).

07.21.19 – I start with my same 5, only Nick Fury now at 7-stars and 5k more power. 22 enemies are in my way with Hand Sentry, 2 Hydra Snipers, Kingpin, Hulk and 2 Mercenary Snipers. HS is my main target and will be a real challenge to control with these guys sniping away at my team…

I start with Defense Up from Fury and then use Black Widow to stun HS as I start laying all attacks on him. I take a few hits and Hulk taunts, but Captain Marvel dispels and I continue to attack HS who is at about 75% health when the stealth bomb goes off. A few more sniper shots and Thanos is dead, but I revive him with Minn-erva and continue to attack HS. As the stealths start to wear off I have HS down to red health and lose Thanos after a few more sniper shots, but then take out HS a few hits later. Now working on a Mercenary Sniper, I take some shots and then heal the team with ME. I take out the Merc Sniper and move on to the next weakest, a Hydra Sniper who does not take long to kill. I continue to work on the snipers until they are gone and then start to chip away at Hulk. Once Hulk is down, only Kingpin remains on screen and reinforcements do not come, so I take him out as well to make it 15 enemies left.

The new bad guys prove to be a Hand Sentry with Hulk, 2 Merc Snipers, 2 Hydra Snipers, Black Widow and a Hand Sorceress. I use Thanos to put Offense Down on a Merc Sniper and have him taunt, Fury adds Defense Up and I stun HS and add Speed Down. I lose Fury to sniper fire and get another stun on HS from BW and continue to try to dispel their buffs and add more debuff throughout. I take out HS and get a well-timed heal from ME to breath new life into my squad and start to work on their attackers. I lose Thanos again, but revive him almost immediately and start taking out their snipers one by one. Once I get it down to just BW, Hulk and Hand Sorceress on the screen I work on Hulk which takes a while, but once he finally dies the reinforcements come with another Black Widow, Kingpin, Merc Sniper, Hydra Sniper and Hulk. Because Hand Sorceress is the weakest and I hate Defense Up against me I focus on her first, but I make the mistake of not remaining focused and she lands a heal and Hulk taunts to throw me off. Even though this does not prove to be a bad short-term move, it turns the tide of the entire battle as the wheels eventually fall off and I die with 8 of 22 enemies remaining.

07.22.19 – Starting with 8 enemies left to get the win, I fully expect to clear the board today and start on Mission #16, the final node of Fear The Darkness. My 5 are ready to go and I start my attacks on the Hydra Sniper and mix in a BW stun on her rival BW. The Merc Sniper was 2-3 hits from dead, so I saved attacks on him until after I took a couple of turns and lost some health to take advantage of the ability energy and health gains, then I remove him and shift focus back to the Merc Sniper to remove their offense. Once he is out of the way just Kingpin, Hulk and 2 Black Widows remain on-screen, so Hulk gets my attention. It takes a while to kill Hulk but after I do I anticipate a Hand Sentry and maybe a Kingpin or Hand Sorceress to join, but after hitting the existing Kingpin a few times no reinforcements come (yet). I take out Kingpin and prove to be wrong as a Hydra and Merc Sniper are the final 2 enemies to face, joining the 2 remaining Black Widows. Fury adds Defense Up and I tee off on one BW altering the course only to dispel buffs from the snipers or add Offense Down. I start hitting the snipers and see BW down to red health, so I finish her off then take the snipers out easily for the win. My reward for Mission #15 is 200k gold and 8k Gold Orb Fragments.

Day 1, Battle 1 (1 total): Phoenix, Quake, Nick Fury, Black Widow & Black Panther (298k) – Phoenix does her job and does it well as I take out the first 7 of 22 enemies out with relative ease. When the reinforcements arrive I am able to stun the Hand Sentry twice to slow him down significantly, but once I finally lose Black Widow the team begins to slowly crumble. I get a lot of really good shots in late, but I die with 12 of 22 enemies remaining.

Day 2, Battle 1 (2 total): Captain Marvel, Star-Lord, Thanos, Minn-erva & Jessica Jones (268k) – Going with this team because, if I can get the battle to go as I wish, I can have them at near full-strength for a battle on Mission #16 late today as well. I take out 3 of the 5 on-screen and reinforcements arrive as only two enemies have not yet shown their faces. I try to work around the Hulk taunts to take out the attackers and remove their offense, but removing the big green guys is likely the best move to allow for the long-term success of this battle. When I pick them off and get to 5 enemies remaining, and only 3 visible on-screen, I am surprised to see that no reinforcements come right away. As a result I decide to take out the last Hulk to allow for an easier focus on the new guys when they get here. Once Hulk is down two more attackers arrive and I know I have this one in the bag. Blind from Star-Lord, Offense Down from Thanos and no tanks to protect these characters means that I can clear their buffs and sail to victory with relative ease.

Be the first to comment on "MSF: Fear The Darkness Live Blog – Mission #15" 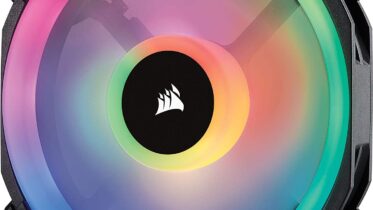 16 independent RGB LEDs in every fan, split between two separate light loops This product is intended as an expansion of the LL120 RGB LED…