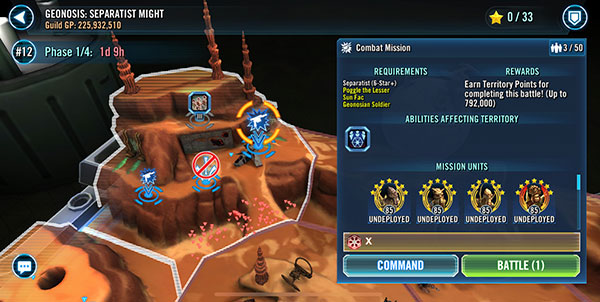 The following is a Walkthrough of my experiences in Phase 1 that may be updated over time. Phase 1’s Combat Mission that requires 3 specific Geonosians has up to 792k points possible.

08.12.19 – 4 battles are in this Combat Mission and 5 enemies are in the first battle. I always try to remove the Clone Trooper Medic (CTM) first in these battles to keep them from taking too long, as that is my biggest complaint about this game mode – the amount of time it takes to fight the battles.

The CTM is down after two attacks and after an Ability Block on the Clone Trooper, the Clone Sharpshooter is next on my kill list followed by the Clone Captain, the Clone Trooper and finally the Jedi Guardian. This battle is an easy one and 187,500 points are banked rather quickly.

The second battle sees 4 enemies and again the CTM is my main target, this time taking 4 attacks from the Geonosians swarms. The Clone Trooper is next and then the Jedi Consular and Jedi Guardian as these battles prove to be a piece of cake for my team’s strength. 297,500 points in the books.

The third battle sees 5 enemies and no medic, so the the Clone Sharpshooter is first on my list, but only after Poggle lands and Ability Block on the Clone Trooper. After the Sharpshooter, the Clone Sergeant and Trooper are the next to go leaving Fives and the Jedi, who I killed with the Geonosian Spy so quickly that I failed to note his name.

The fourth and final battle has 6 enemies and is much more difficult. I take out the CTM first after several swarming attacks then work on the Clone Sergeant and Sharpshooter. The Clone Captain does not have the locked Entrenched buff, so I step out of order and remove him, then back to the Sharpshooter and Clone ARC Trooper, both of whom are Entrenched. The Sharpshooter and ARC Trooper go down with a fight after I first Ability Block Kit Fisto, then the Jedi Master who looked like a Youngling up against Palpatine in Episode 3, then I remove him from the screen for 792k points in the North Territory.

08.27.19 – The first battle is a breeze as I think I was only attacked 3 times in total. Geo Spy hits even harder than ever – thanks to Operation Metaverse for the tip on taking him to Gear 13! The second battle I use basic attacks almost exclusively and walk all over the enemies. With no Clone Trooper Medic available to hit first in Battle #3 I go after the Clone Sharpshooter first, and after him I am annoyed with Fives so away he goes. At these gear levels this is not really a challenge as I am really pleased that I spent so much time and energy on beefing this Geonosian faction up.

To start the fourth and final battle I go after the CTM to start and after taking him out I take on some serious enemy fire. After surviving and recalling the Geo Brute I start in on the Clone Captain, as he is the lone Clone who is not Entrenched. After he is dead I start on Kit Fisto since he is the only other enemy on the board not Entrenched, but I lose me Geo Soldier. I am able to remove the Clone Sergeant next without any damage and now have a 5 v 2 FTW. The ARC Trooper is my only options with the Sharpshooter in Stealth, and the G13 Geonosian Spy pays off bigtime. A huge hit saves me a ton of time and probable damage as my protection is nearly gone on all of my team, and I now have a 5 v 1. GBA clears the debuffs and the assist attacks are back on as I get the 792k for the win.